Evil elitists are plotting to transmit mind-controlling madness, turning America’s citizenry into docile sheep to do their bidding! No, I’m not talking about today’s election (though I could be!), it’s the plotline of CAPTAIN AMERICAN AND THE FALCON: MADBOMB, Jack Kirby’s 1975 seven part epic collected in this 2004 graphic novel release. The King was making his return to Marvel after five years working for rival DC, and took over the reigns of his baby Cap’s monthly book as writer/artist/editor. 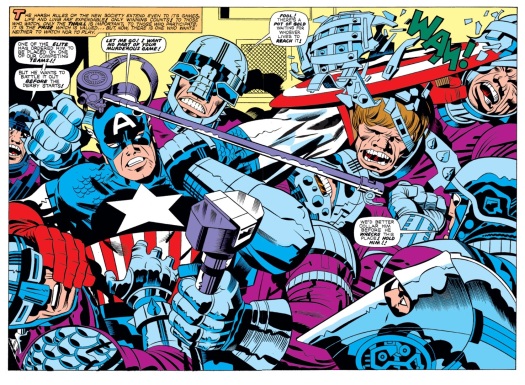 Kirby was never a great writer, but he shines in this tale of an attempted hostile takeover of America by a group of elitists using the Madbomb to control the populace and rule the good ol’ USA. Cap and the Falcon are enlisted by no less than Secretary of State Henry Kissinger to thwart the fiendish plot. King Kirby’s artwork is stunning, embellished by inkers Frank Giacoia and D. Bruce Berry. Kirby gives us some great two-page spreads filled with gadgets and non-stop action as only he could.

A sci-fi superhero spectacular, CAPTAIN AMERICA AND THE FALCON: MADBOMB is a visual delight that all Kirby fans will enjoy. Now don’t forget to go out and vote today… before the elitists set off the Madbomb and all hell breaks loose! Defenders of Liberty Unite! (That’s an unabashed plug to vote for Gary Johnson, folks!)

I usually write about old movies here, but they’re not my only interest. When I was younger, back in the 70s, I collected comic books. I had stacks and stacks of them: Marvel, DC, Charlton, Atlas, undergrounds. Even the oversized Warrens and of course, Mad. Now that I’m slightly older (well, okay maybe more than just slightly), I’ll occasionally pick up a trade paperback that grabs my nostalgic interest. While browsing through the local Barnes & Noble recently, my gaze came upon one that screamed “Buy me now”! That book was WARLOCK BY JIM STARLIN: THE COMPLETE COLLECTION.