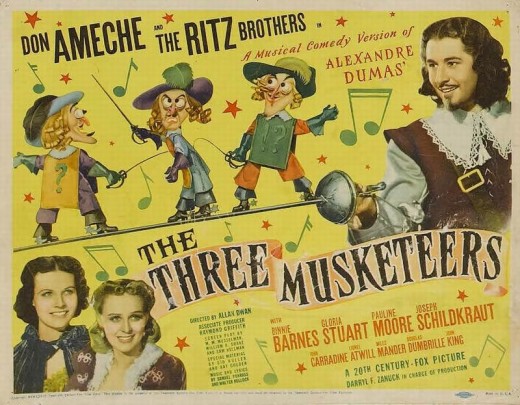 The cult of the Three Stooges is as strong as ever. The Marx Brothers are studied in universities as artists. Laurel & Hardy’s “Sons of the Desert” fan club grows daily. Yet the modern world ignores the Ritz Brothers, and that’s a downright shame. Harry, Jimmy, and Al Ritz were multi-talented comic anarchists who  influenced a generation of funnymen from Mel Brooks to Jerry Lewis. Signed to a 20th Century-Fox contract in 1936, they lent support to big budget musicals like ONE IN A MILLION and ON THE AVENUE before being cast in a series of starring comedy vehicles highlighting their rapid-fire banter, madcap musical routines, and slapstick humor. They’re at their best in THE THREE MUSKETEERS, a musical comedy take on the Alexandre Dumas classic with Don Ameche as the dashing D’Artagnon. 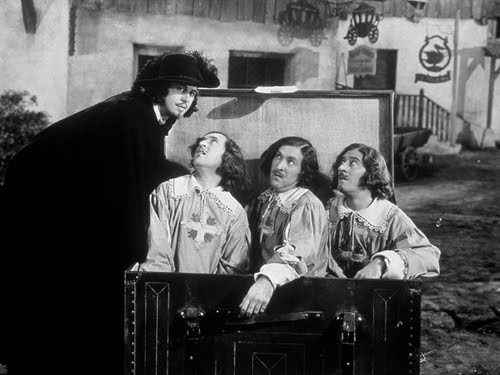 The Ritzes are three dumb clucks who we meet plucking chickens at the Coq D’Or Tavern in Paris. Brash young D’Artagnon, a new recruit in the King’s Musketeers, has summoned veterans Athos, Porthos, and Aramis to duel with him and prove his mettle. The Musketeers arrive early, and wind up losing a drinking contest to the Ritzes. The brothers put the Musketeers to bed and don their uniforms to impress some damsels when D’Artagnon comes in. Mistaking the Ritzes for the real thing, the four end up battling Cardinal Richeleau’s guardsmen, then get entangled in a political plot involving royal court intrigue, romance, and plenty of swordplay interspersed with wacky Ritz bits and songs like “Voila”, “Milady”, “Song of the Musketeers”, and of course “Chicken Soup (the Plucking Song)”.

The Ritz Brothers handle all the comedy, and their slapstick shenanigans and precision dances are letter-perfect. Harry Ritz could mug with the best of them, and Jimmy and Al are equally silly. Their cymbal routine while trying to cover for D’Artagnon is a masterpiece of comic timing:

Ameche is fun as D’Artagnon, cutting a handsome figure and wooing lovely Pauline Moore (Lady Constance). Villainy is taken care of by none other than Lionel Atwill (DeRouchefort), aided and abetted by Miles Mander (Cardinal Richeleau) and Binnie Barnes (Lady DeWinter). Joseph Schildkraut, Oscar winner for 1937’s THE LIFE OF EMILE ZOLA, stands in as King Louis XIII, with Gloria Stuart a fetching Queen Anne. The Familiar Face Brigade in this one includes John Carradine, Douglas Dumbrille, Lester Matthews, and Gino Corrado. Alan Dwan had been directing movies since 1911, and kept steady at it for the next fifty years, amassing an impressive list of credits. He’s in fine form guiding the Ritz Brothers through their frenetic paces, as he also did in that year’s THE GORILLA. Some of his more popular films were the Shirley Temple REBECCA OF SUNNYBROOK FARM, SANDS OF IWO JIMA (with John Wayne), and the feminist Western CATTLE QUEEN OF MONTANA. 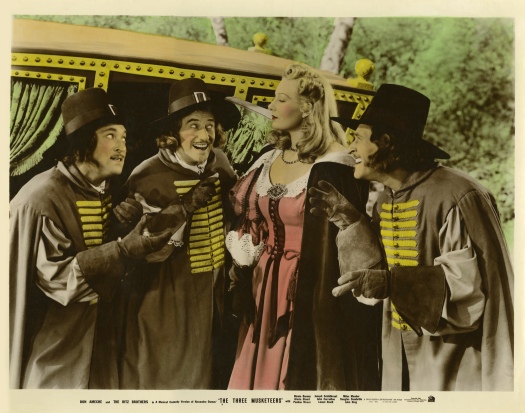 The Ritz Brothers films went downhill after this, with Fox’s B-unit producer Sol Wurtzel taking charge of their careers, causing Harry to quip, “Things have gone from bad to Wurtzel”. They left the studio and moved on to Universal, where the quality of their films did not improve. Leaving Hollywood behind in the mid-40’s, the boys became headliners in Las Vegas and nightclubs across the country. Their impeccable timing, incorporating music and dancing into their slapstick repertoire, kept the Ritzes active until Al’s death in 1965. Harry and Jimmy made a last appearance together in Al Adamson’s sex farce BLAZING STEWARDESSES. Harry, who was considered a genius by his peers, did a cameo in the Mel Brooks comedy SILENT MOVIE. He died in 1986, a year after brother Jimmy. The Ritz Brothers are gone, but their creativity shouldn’t be left to rot away in dusty film cans. The zany trio deserves to be rediscovered by lovers of slapstick humor, and THE THREE MUSKETEERS is a good place to start.