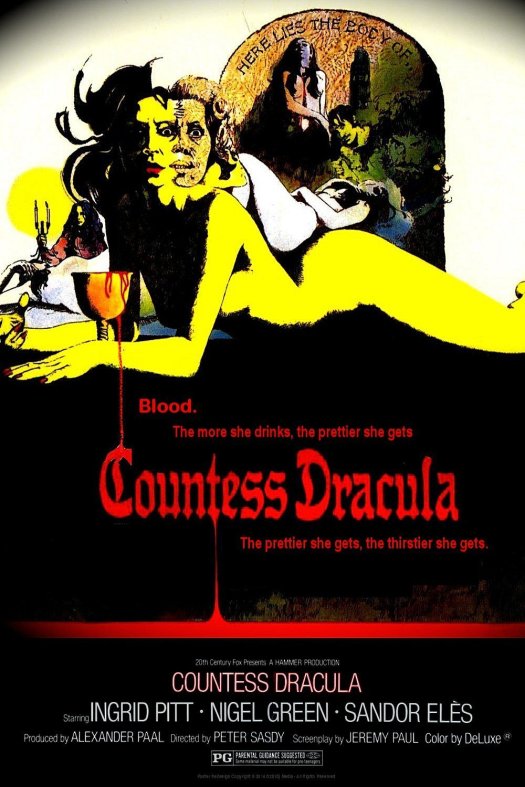 Iconic Ingrid Pitt became a horror fan favorite for her vampire roles in the early 1970’s.  The Polish-born actress, who survived the horrors of a Nazi concentration camp as a child during WWII, played bloodsucking lesbian Carmilla in Hammer’s THE VAMPIRE LOVERS, based on the classic story by J. Sheridan LeFanu, and was a participant in the Amicus anthology THE HOUSE THAT DRIPPED BLOOD opposite Jon Pertwee in that film’s best segment. Finally, Ingrid sunk her teeth into the title role of COUNTESS DRACULA, a juicy part where she’s not really a vampire, but a noblewoman who gets off on bathing in blood, loosely based on the real life events of Hungarian Countess Elizabeth Bathory.

Bathory (1560-1614) was the most infamous female serial killer in history, officially found guilty of 80 murders, yet a diary allegedly found puts the count as high as 650! Bathory was a sadistic woman who delighted in torturing young women, through beatings, burning, freezing, and cannibalism. She was found guilty of her atrocities and imprisoned until her death. Local gossips claimed she delighted in bathing in her victim’s blood, but there is no proof. The film uses that part of the legend as it’s starting point, and Bathory’s story  becomes just another Hammer Gothic horror tale. 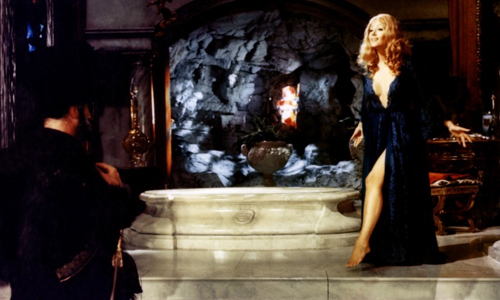 Elderly Countess Elizabeth Nadasdy (Bathory’s real married name), shortly after her husband’s death, accidentally discovers bathing in the blood of virgins restores her youth and beauty. With the aid of her long-time lover Captain Dobi and nurse Julie, she procures young women to kill and keep her young, going so far as to have daughter Ilona kidnapped so she can impersonate her. The Countess has designs on young Lt. Imre Toth, and must maintain her bloody ritual in order to have him fall in lover with her. Castle historian Fabio becomes suspicious, and discovers the truth, but is hanged by Dobi before he can alert Toth. Ilona escapes, and Elizabeth is willing to kill her to obtain that precious virginal blood and stay young… .

The movie was a bit disappointing to me. The horror quotient is low, with more bare boobs than bloody murders (not that there’s anything wrong with that!). Pitt is good as always (though her heavily accented voice was dubbed) in a part where she’s more a Jekyll & Hyde character than vampiric countess. Her old age makeup hides her beauty, which is revealed whenever she takes her blood baths (with a giant loofa!). Other cast members include Nigel Green as Captain Dobi, Lesley-Anne Down as Ilona, Sandor Eles (EVIL OF FRANKENSTEIN) as Lt. Toth, and Peter Jeffrey as the local inspector. 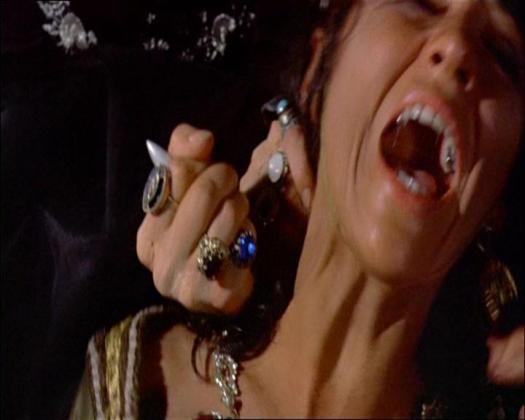 Director Peter Sasdy came from the ranks of British TV, and among his horror credits are TASTE THE BLOOD OF DRACULA, HANDS OF THE RIPPER , DOOMWATCH, and NOTHING BUT THE NIGHT. His COUNTESS DRACULA isn’t one of his better efforts, it moves too slow and doesn’t have enough horror to keep an enthusiast like me interested. The only thing that truly held my interest was Ingrid Pitt’s performance, and if you’re a Pitt person, you’ll want to watch this one. Otherwise, go find a copy of THE VAMPIRE LOVERS. 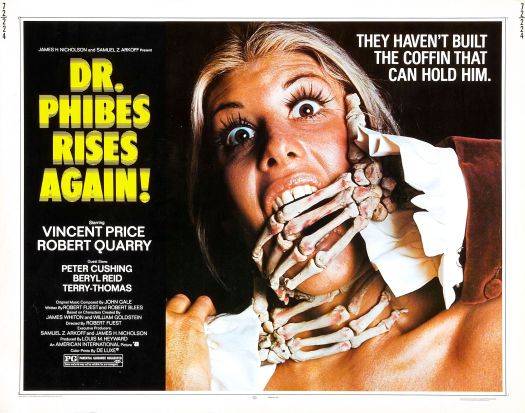 Since 1971’s THE ABOMINABLE DR. PHIBES  was such a big hit, American-International Pictures immediately readied a sequel for their #1 horror star, Vincent Price. But like most sequels, DR. PHIBES RISES AGAIN isn’t nearly as good as the unique original, despite the highly stylized Art Deco sets and the presence of Robert Quarry, who the studio had begun grooming as Price’s successor beginning with COUNT YORGA, VAMPIRE. The murders (for the most part) just aren’t as monstrous, and too much comedy in director Robert Feust’s script (co-written with Robert Blees) turn things high camp rather than scary. 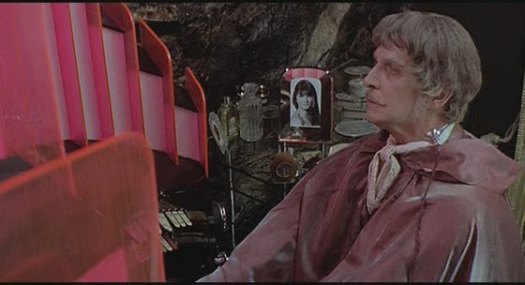 Price is good, as always, bringing the demented Dr. Anton Phibes back from the grave. LAUGH-IN announcer Gary Owens recaps the first film via clips, letting us know Phibes escaped both death and the police by putting himself in suspended animation. Returning with loyal servant Vulnavia (who’s now played by Valli Kemp, replacing a then-pregnant Virginia North), Phibes plots to travel to Egypt with his deceased wife Victoria to the ancient Pharaoh’s Tomb where flows the River of Life. Seems the moon is in the seventh house, and Jupiter’s aligned with Mars… no wait, that’s from the rock musical HAIR! Anyway, there’s some sort of astrological phenomenon involving the moon that will allow Phibes to revive his dormant bride. 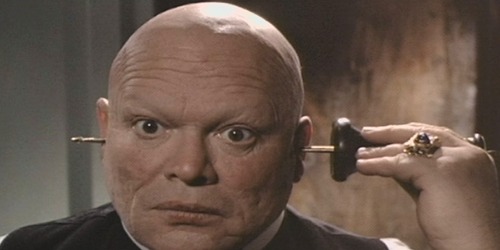 Phibes’ home in Maldeen Square is in ruins, and he discovers his safe emptied of the Scared Scroll he needs to locate the tomb. It can only be the work of Darrus Biederbeck (Quarry), who has his own reasons to find the River of Life. This gives the good doctor an excuse to commit a series of gruesome murders in order to achieve his fiendish goal. The best is when Biederbeck’s manservant (actor/wrestler Milton Reid) is attacked by snakes (and you know how much I hate snakes! ) and gets the old hidden-spike-in-the-telephone-receiver-through-the-ears! Phibes’ other ghastly deeds involve having a man eaten alive by an eagle, stung by scorpions, squished between two blocks of granite, sandblasted to death, and thrown overboard inside a giant bottle of gin (Oscar winner Hugh Griffith gets that dubious honor). Ingenious yes, but not as cool as the previous movie’s ten curses of Egypt murders. You just can’t beat that Old Testament-style torture! 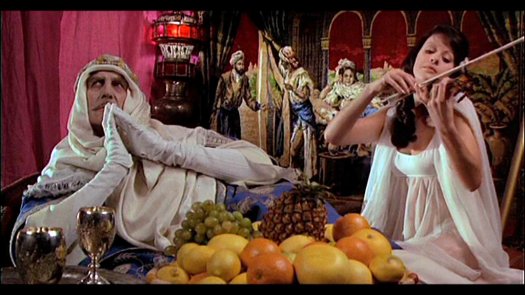 I thought Valli Kemp was misused as Vulnavia; instead of a silent-but-deadly assassin, she’s more like a spokesmodel from THE PRICE IS RIGHT (no pun intended). Scotland Yard’s finest, Inspector Trout and Superintendent Waverly (Peter Jeffries, John Cater) return, as do Phibes’ Clockwork Wizards. But the intrepid cops are basically comic relief, and the robotic Wizards are wasted. Peter Cushing  , Terry-Thomas, and Beryl Reid are also wasted in too-small cameos, though Fiona Lewis  has a good turn as Biederbeck’s fiancé Diana. Victoria Regina Phibes is still played by Caroline Munro, who can’t do much but look beautiful as a corpse. DR. PHIBES RISES AGAIN is gorgeous to look at, but suffers the same fate as most sequels. The formula has worn thin, and though a third Phibes film was announced (THE BRIDES OF DR. PHIBES), it was never made. This entry did well enough at the box office, but Dr. Anton Phibes would rise no more.