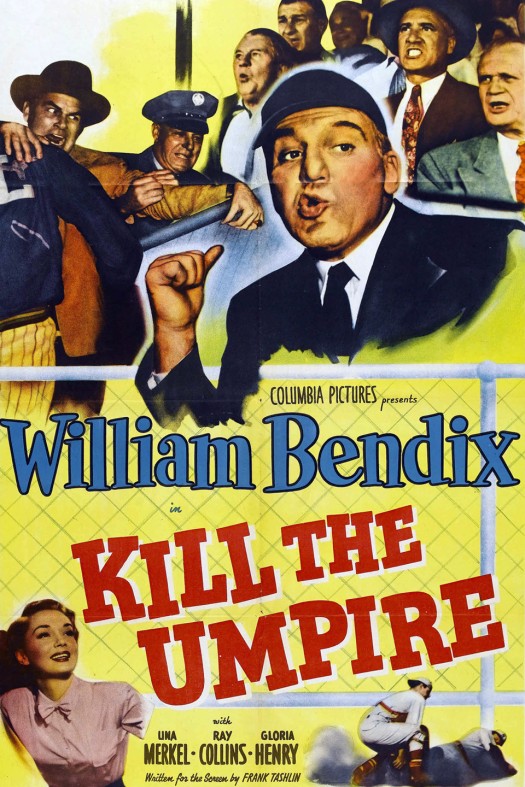 Ahh, spring is in the air, that magical time of year, when a young man’s fancy turns to thoughts of… baseball!! That’s right, Dear Readers, Opening Day is upon us once again, and what better way to celebrate the return of America’s National Pastime than taking a look back at KILL THE UMPIRE, a 1950 comedy conceived in the warped mind of former animator Frank Tashlin and directed by ex-Warners vet Lloyd Bacon. 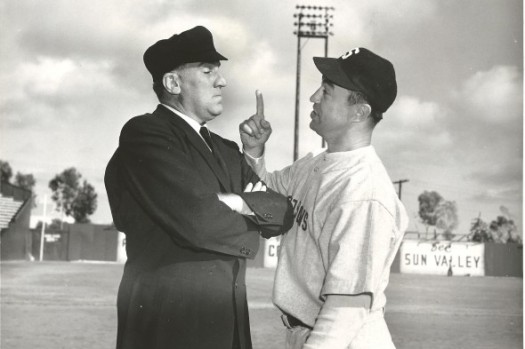 Big lug William Bendix stars as Bill Johnson, an ex-major leaguer whose passion for the game keeps him from holding a regular job because he keeps playing hooky to go to the ballpark. Bill hates only one thing more than missing a game – umpires! But when his exasperated wife threatens to leave him, his ex-ump father-in-law suggests he go to umpire school to save his marriage. Bill balks at first, but then reluctantly agrees, not wishing to lose his spouse. He does everything in his power to get ejected out of the school, including donning a pair of thick “Coke-bottle’ glasses, but eventually comes around. Bill and his roomie Roscoe are sent to the Texas League, where he finds Texans hate umpires even more than he does, at one point getting knocked out by a tossed cowboy boot! Some gamblers attempt to bribe Bill, but he causes them to lose by having their team forfeit, causing a Texas-sized riot at the old ball game! Fans want Bill’s head on a platter, and it all culminates in a wild chase with Bendix in drag, pursued by an angry mob and angrier gamblers. But as you probably can guess by now, all’s well that ends well.

Tashlin’s loony screenplay features many of his trademark cartoony sight gags, like Bendix wearing an over-inflated chest protector, then getting his spikes stuck in a wooden floor, with hilarious results. The chase is a riot too, with our hero being dragged water-skiing style on a piece of fence behind an ambulance. Tashlin strikes the right balance of situation comedy and slapstick hijinks, aided by Bacon’s deft direction. Bacon was adept at any type movie, but got his start with Chaplin and Mack Sennett; his comedy bona fides include GOLD DUST GERTIE, THE IRISH IN US , A SLIGHT CASE OF MURDER, and MISS GRANT TAKES RICHMOND.

Some may find KILL THE UMPIRE a bit dated, but it’s still got plenty of laughs in it to make it worth your time. And it’s available on YouTube for your convenience! Makes a good pre-game warm-up…. now let’s Play Ball!

When I hear the word “Runyonesque”, I think about racetrack touts, colorful Broadway denizens, dames with hearts of gold, and the like. If you want to make a Runyonesque movie, what better way than to have author Damon Runyon himself produce it, as RKO did for 1942’s THE BIG STREET. All the elements are there, the jargon, the characters, but the film suffers from abrupt shifts in tone from comedy to drama, and a totally unpleasant role for Lucille Ball . The result is an uneven movie with a real downer of an ending.

Based on Runyon’s short story “Little Pinks”, it follows the unrequited love of bus boy Augustus “Little Pinks” Pinkerton for torch singing gold digger Gloria Lyons, dubbed “Her Highness” by Pinks. Henry Fonda plays Pinks as  lovestruck, spineless sad sack, dubbing Lucy Her Highness, even though she’s thoroughly rotten to him. When she’s smacked by her gangster boyfriend Case Ables ( Barton MacLane ) down the stairs and loses the ability to walk, she still treats Pinks like shit. The two leads aren’t very happy characters, and the movie suffers because of it.

It’s Pinks who helps her the most, paying her hospital bills and willing to practically wheel her all the way to Miami (the scene they cause at the Holland Tunnel is a comic standout), yet Her Highness is just using the lowly bus boy, her only goal being to snag millionaire playboy Decatur Reed (William T. Orr, later a successful television producer for Warner Bros). I think it’s Lucy’s character that turned me off; even at the end (which I won’t spoil for those who want to watch), I didn’t have much sympathy for her. She’s a self absorbed, total bitch, especially in her treatment of those who care about her, and almost completely ruined the film for me.

The movie’s saving grace is the eccentric supporting cast that brings those trademark “Runyonesque” characters to vivid life. Ray Collins   and Sam Levene hit the bull’s-eye as a pair of erudite gamblers named Professor B and Horsethief. Eugene Pallette and Agnes Moorehead shine in the parts of Violette Shumberg and Nicely-Nicely Johnson, a “fat-and-skinny” odd couple (the Nicely-Nicely character would later pop up in GUYS & DOLLS, played this time by Stubby Kaye). Millard Mitchell   has an early role as retired hood Gentleman George. Among the other Familiar Faces around the big street you’ll find Louise Beavers, Hans Conreid, George Cleveland, Charlie Hall, Donald Kerr, Marian Martin, John Miljan, and Dewey Robinson. Ozzie Nelson and his Orchestra play in MacLane’s Miami nightclub, and look closely for Bess Flowers and a young Marie Windsor as faces in the crowd.

Director Irving Reis (THE BACHELOR AND THE BOBBY-SOXER, ALL MY SONS) had the unenviable task of balancing the bittersweet comedy-drama of Leonard Spielgass’s script, and isn’t quite up to it. Reis was fairly new in the director’s chair at the time, and those schizophrenic shifts from offbeat comical Runyonesque hoods to mean Lucy throwing shade at Fonda are quite jarring. Perhaps if director Reis had toned down Ball’s character a few notches and let Fonda lighten up a bit, I’d feel different. As it stands, I chalk it up as an interesting failure, but fans of Fonda, Ball, and Damon Runyon yarns will probably want to judge for themselves. 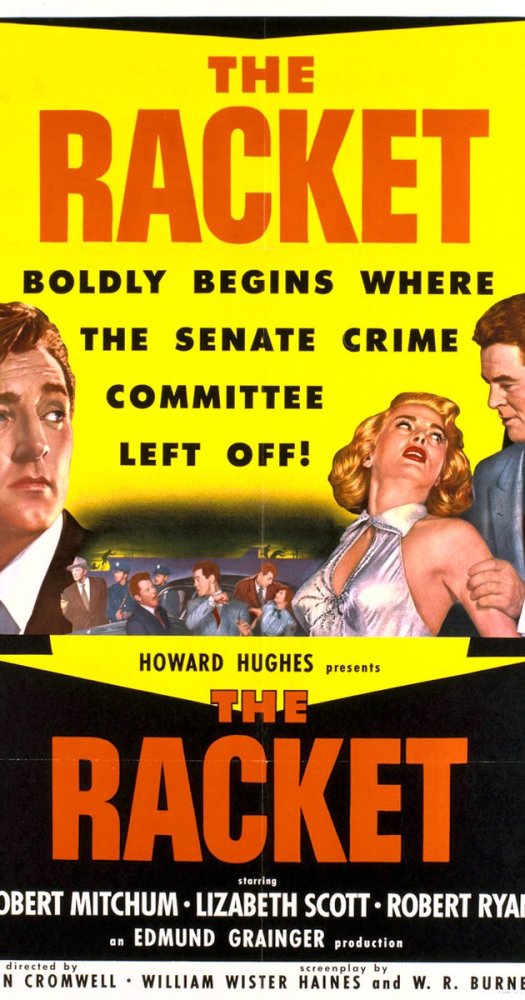 A solid film noir cast headed by Robert Mitchum , Robert Ryan , and Lizabeth Scott ; and a lineage that dates back to both a Broadway smash and an Oscar-nominated original can’t save THE RACKET from rising above minor status. Once again, tinkering behind the scenes by RKO honcho Howard Hughes, this time under pressure from Hollywood censorship czar Joseph I. Breen, scuttles a promising premise that coulda been a contender into an average movie. 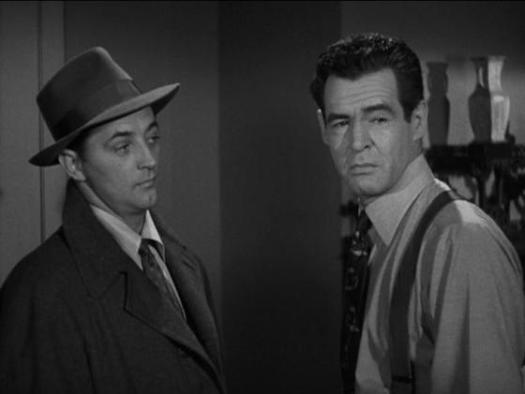 City crime boss Nick Scanlon is an old-school hood whose violent ways don’t jibe with the modern-day syndicate. Capt. Thomas McQuigg, “an honest cop” who’s a no-nonsense guy, is determined to take him down. But the city’s rife with tainted politicians, making McQuigg’s job that much harder. Scanlon’s got a headstrong kid brother named Joe dating a “cheap canary” named Irene, and McQuigg plans on using him to get to Nick. Add a crooked DA, a virtuous young cop on the rise, a newspaper reporter, and a detective on the take, and you’ve got a recipe for slam-bang gangland entertainment.

Not so fast! Breen objected to several plot points, including Irene’s profession (she was supposed to be a hooker), some of the more violent aspects, and the fact that the bent detective gets away with murder. He called the film “a new low in crime screen stories” and “thoroughly and completely uacceptable within the provisions of the Production Code” (source: American Film Institute). Hughes and his producer Edmond Grainger made extensive changes, turning Irene into a nightclub singer, cutting out some violence, and making sure the bad guys get what’s coming to them. Sam Fuller was brought in to doctor the script, and Nicholas Ray, Tay Garnett, and Grainger himself reshot some scenes. The result is an average crime drama that, while still retaining some power, fails to rise above it’s restraints imposed by the Code.

Director John Cromwell had starred in the original 1927 Broadway production as McQuigg, along with a promising young actor named Edward G. Robinson. He knew the material better than anyone associated with this version, and must’ve been supremely disappointed at what they did with his film (Cromwell was soon to be blacklisted by the odious HUAC Commie hunters). William Wister Haines and W.R. Burnett’s tough-talking script was taken out of their hands and sanitized (Burnett also knew this territory, having penned the screenplays for LITTLE CAESAR, THE BEAST OF THE CITY , and SCARFACE). DP George Diskant’s camerawork retains some flashes of his brilliance, but nowhere near his work in THEY LIVE BY NIGHT or KANSAS CITY CONFIDENTIAL. 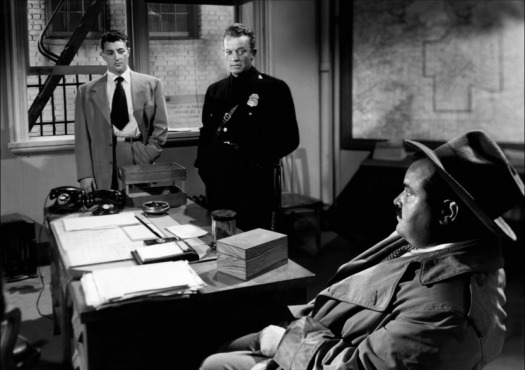 The performances by leads Mitchum and Ryan still hold up, with Ryan particulary brutal as the ruthless Nick. Scott’s role was changed so much it seems like she lost interest in it halfway through. William Talman is a good guy for once as the honest young cop who looks up to McQuigg, paying for it with his life. Ray Collins as the D.A in the pocket of the syndicate shines, as does William Conrad as the detective who acts as enforcer for the gangsters. The film’s loaded with Familiar Faces, including Robert Hutton as the reporter smitten with Irene, and Don Beddoe , Brett King, Harry Lauter, Eddie Parker, Don Porter , Walter Sande, Milburn Stone , Les Tremayne, and Herb Vigran .

THE RACKET is okay for what it is, but when I think about what it could have been, I just shake my head. The early Fifties were a time of extreme paranoia in Hollywood, with both the censors and the Communist witch hunters clamping down on anything that didn’t jibe with their party line, making them just as bad as the other side. I haven’t seen the rarely-screened 1928 silent version (which lost the Oscar to WINGS), so I can’t really compare the two. What we’re left with is a film that’s like drinking a shot of watered-down booze; unsatisfying and in need of a stronger kick. If there’s any “classic” film in desperate need of a remake, this would be it. Are you listening, Hollywood?