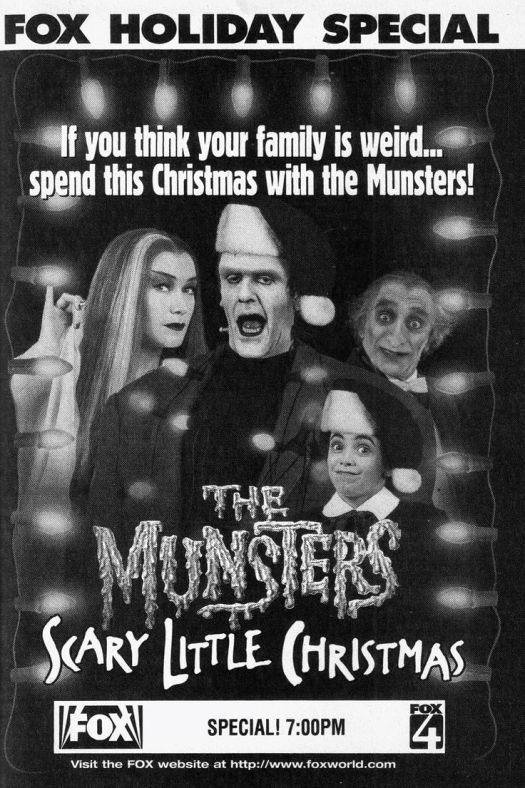 If you grew up in the “Monster Kid” generation like me… well, you’re old! That is, old enough to remember THE MUNSTERS, the silly 60’s sitcom about a family of monsters adjusting to life in suburbia. The show ran two seasons and inspired a feature film, 1966’s MUNSTER, GO HOME!, with Fred Gwynne (Herman, the Frankenstein’s Monster surrogate), Yvonne DeCarlo (Lily, a vampire resembling Carroll Borland in MARK OF THE VAMPIRE), Al Lewis (Grandpa, aka Count Dracula himself!), and Butch Patrick (Eddie, a wolf-boy) reprising their roles. The Munsters returned in a 1981 TV Movie THE MUNSTERS’ REVENGE with Gwynne, DeCarlo, and Lewis, then as a 1988-91 syndicated sitcom THE MUNSTERS TODAY, this time starring John Schuck (Herman), Lee Meriweather (Lily) and Howard Morton (Grandpa).

The fright family have proved durable, and were trotted out yet again for a 1996 holiday TV Movie, THE MUNSTERS SCARY LITTLE CHRISTMAS. I’m usually not a fan of reboots, being a stickler for the originals (as us old folks do!), but this one surprisingly stuck to the spirit of the classic series. Okay, so it’s not the original cast, but the actors involved captured the essence of The Munsters,  and the set recreates the Munster Mansion’s groovy gloom. Most importantly, it made me laugh out loud in places! 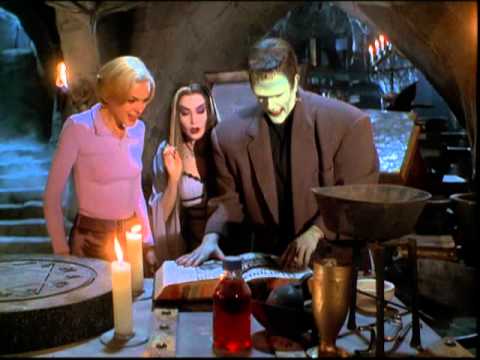 Grandpa (stand-up comic Sandy Baron, Jack Klompus on SEINFELD), who tells everyone within earshot he was “Eastern Europe’s preeminent alchemist”, uses his wizardry to conjure up snow in Southern California. But his experiment backfires, and instead conjures up none other than Santa Claus, along with a couple of naughty elves. Now Santa’s stuck in LA while Grandpa tries to figure out how to reverse the spell. The  naughty elves, sick and tired of working every Christmas and just wanting to party, try to slip a mickey in Santa’s figgy pudding, and Jolly Ol’ St. Nick transmogrifies into a giant fruitcake (Elf #!: “But what if, while we’re gone, someone tries to eat Santa?” Elf #2: “Never happen – NOBODY likes fruitcake!”). Can Grandpa’s mad science restore Santa in time to save Christmas Eve, and will little Eddie finally get his traditional Transylvanian Christmas?

There’s gobs of ghoulish humor and references to Ghosts of Classic Horror Past. The cast also features marvelous Mary Woronov as neighbor Edna Dimwitty, winner of the neighborhood Christmas decorating contest five years running, and out to stop Lily’s gruesome tableau from taking first prize. Producer John Landis (AN AMERCIAN WEREWOLF IN LONDON, TWILIGHT ZONE: THE MOVIE) is an old ‘Monster Kid’ himself, and certainly knows the territory. Veteran TV writers Ed Ferrara (who was a part time pro wrestler and worked behind the scenes for WWF & WCW in their 90’s heydays) and Kevin Murphy (later the head writer for DESPERATE HOUSEWIVES) put together a fun filled script, and director Ian Emes, an animator noted for his work with Pink Floyd, aids tremendously with his bizarre visual concepts.

THE MUNSTERS SCARY LITTLE CHRISTMAS first aired on Fox , and is available online, streaming, and DVD. Sure, it gets a bit saccharine in the scenes between Eddie and Santa, but whaddaya want – it’s a Christmas TV Movie! I really enjoyed this pretty much forgotten holiday classic, certain to make a “scary little Christmas” for the ‘Monster Kid’ in everyone!