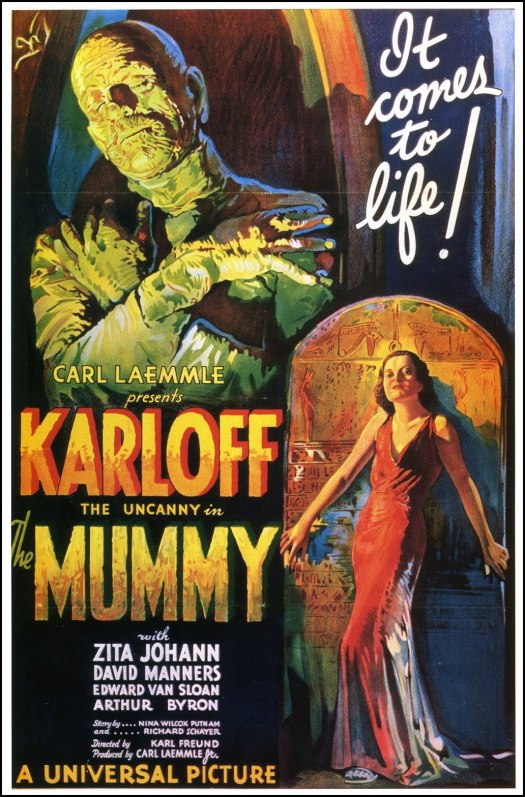 Boris Karloff is as slow and still as death itself in THE MUMMY. His performance as Ardeth Bey/Imhoptep conveys the horror of a living dead man with the romance of a love across the ages. This Mummy isn’t just a shuffling instrument of some High Priest; Imhotep was a High Priest himself, brought back to half-life by foreign interlopers and now searching for the woman he lost 3700 years ago. Aided by two of Jack Pirerce’s fantastic make-up jobs, Karloff brought all his sinister power to the role and created yet another masterful characterization that still frightens audiences today.

A British Museum expedition in 1921 digs up the sarcophagus of Imhotep, high priest of Karnak who, according to the hieroglyphics, was buried alive for committing sacrilege. A smaller box comes with an ominous warning: “Death, eternal punishnet, for anyone who opens this casket…Amon-Ra”. While Sir Joseph Whemple and occult expert Dr. Muller discuss the ramifications of the find, impetuous young Ralph Norton opens the box and begins reading from the Scroll of Thoth. As he mouths the ancient incantation, the mummy of Imhotep slowly opens its eyes, its hands sliding down its dusty, gauze-wrapped body. Norton screams as Imhotep grabs a papyrus and slinks out of the tent. Whemple and Muller come running, only to find Norton laughing hysterically. “It decided to take a little walk”, Norton howls, driven mad by the ghastly sight he witnessed. 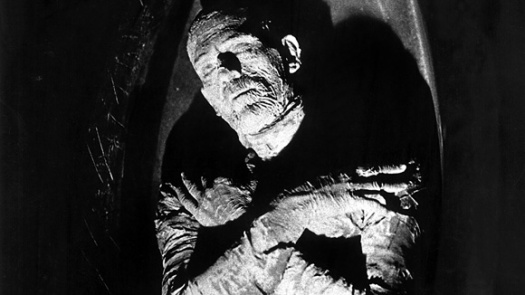 We only get a brief glimpse of Karloff as Imhotep in the first mummy make-up by Pierce. Universal reused it for its  40s Mummy series, with Tom Tyler as Kharis in THE MUMMY’S HAND, then Lon Chaney Jr. in three sequels. The rest of THE MUMMY has Karloff as Ardeth Bey dressed in fez and kaftan, coal black eyes shining from his wrinkled face, eyes that have stared into the face of death and know it’s terrible dark secrets. 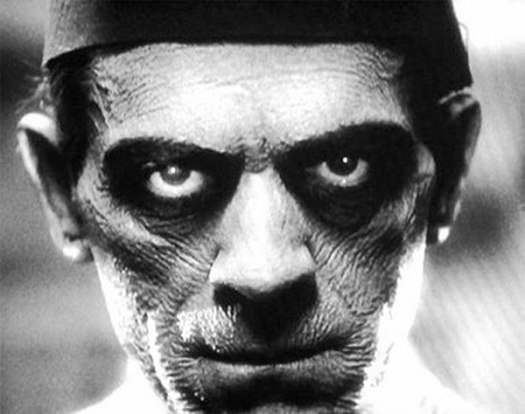 Fade in to 1932 and another expedition, this one headed by Whemple’s son, Frank. This is where Ardeth Bey arrives on the scene, telling Frank and Prof. Pearson he knows where to find the tomb of Princess Ankh-es-en-amon. The workers find steps buried in the sands, and the discovery is made. The princess’s coffin and other artifacts go on display at the Cairo Museum, and Bey hides in the shadows afterhours, lighting incense and reading from that ancient papyrus. Across town, Helen Grosvenor, patient of Dr. Muller, is compelled by an unseen force to the museum, banging on the door until fainting.Frank and his father bring the girl to their hotel. Helen mutters a name familiar to the elder Whemple…Imhotep!

Frank is enamored of the enigmatic Helen, who has no recollection fo being at the museum. Bey arrives at the Whemples and Helen is immediately drawn to her (“Haven’t we met before, Miss Grosvenor?”). Bey has come for the Scroll of Thoth, and Muller and Whemple realize he’s Imhotep incarnate. “If I could get my hands on you”, says Muller, “I’d break your dried flesh to pieces”. But Bey’s willpower is too strong, and he leaves after telling Whemple to have his Nubian servant (now under Bey’s control) to bring him the scroll or suffer the consequences. 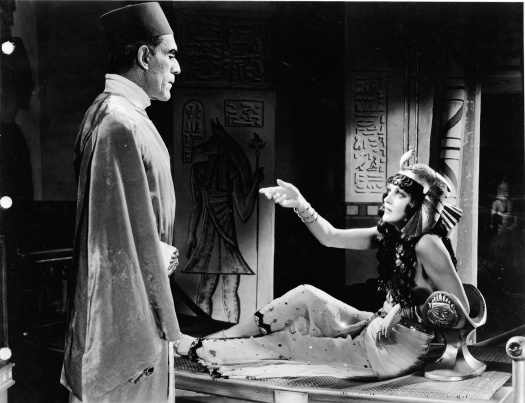 Muller urges Whemple to burn the scroll, but when he attempts it, Bey’s mystical powers cause him to have a heart attack. The Nubian retrieves the scroll and delivers it to Bey. Summoning Helen, Bey puts her in a trance and, in his pool, shows her “memories of love and crime and death”. The scene turns to ancient Egypt, where after the death and burial of Ankh-es-en-amon, Imhotep steals the Scroll of Thoth and goes to her forbidden tomb to revive her. Caught in the act, he’s wrapped completely in gauze (except his eyes) and buried alive, the slaves who buried him killed so no one will find his grave. Helen awakes, remembering nothing. Frank and Muller decide the only way to stop Bey is let Helen lead them to her. When next she’s summoned, Bey dresses her in the clothing of Ankh-es-en-amon. She’s now overtaken by the dead princess’s spirit, and Bey tells her she must be sacrificed in order to be resurrected as he was those centuries ago. Frank and Muller arrive but are powerless over Bey, but Helen, now truly Ankh-es-en-amon, prays to the statue of the god Isis for help. The statue’s arm lifts and destroys both Bey and the scroll, freeing Helen and letting the princess’s spirit have its final peace. Ardeth Bey/Imhotep’s flesh turns to dust, with nothing left of him save a skeleton and a pile of rotted rags.

Director Karl Freund’s career has been discussed this month in my look at MAD LOVE, so I’ll just say e does a tremendous job with the supernatural material. The set designs are superb, evoking ancient Egypt, and Pierce’s make-ups are always meticulous in their design. The cast features exotic-looking Zita Johann (Helen), whose screen career was short but was well known on the Broadway stage (and was once married to actor/producer John Houseman). Universal’s resident heartthrob David Manners (Frank) served the same function in horror classic DRACULA and THE BLACK CAT. Then there’s Edward Van Sloan (Muller), the Grand Old Man of Horror. The original Van Helsing to Lugosi’s DRACULA, Van Sloan contributed support to macabre movies like FRANKENSTEIN, DRACULA’S DAUGHTER, THE BLACK ROOM, the serial THE PHANTOM CREEPS, and dozens of other films in his distinguished career. Arthur Bryan, Bramwell Fletcher, Leonard Mudie, and Noble Johnson add strong support in their roles as well. Boris Karloff was a star for almost 40 years, acting right up until his death in 1969. His presence in THE MUMMY and other shockers helped give them the longevity they deserve. Horror movies wouldn’t exist without these early excursions into the fantastic, and I’m grateful to be able to revisit these classics and turn new generations on to Karloff, Lugosi, and all the other pioneers of dark cinema. . 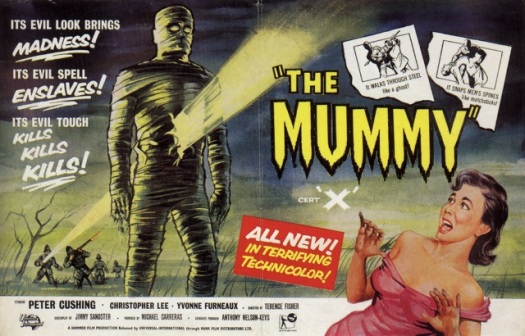 (third in a series)

The gang’s all here in 1959’s THE MUMMY – Christopher Lee, Peter Cushing, director Terence Fisher, writer Jimmy Sangster – but the result is far different than CURSE OF FRANKENSTEIN and HORROR OF DRACULA. Based on Universal’s 40s Mummy series, not the 1932 Karloff classic, THE MUMMY is as slow moving as…well, as a mummy! Try as they may, the film suffers from budget constrictions and a poor script. Definitely not one of Hammer’s shining moments.

It’s 1895, and the Banning family (father Steve, son John, uncle Joe) are on an archeological expedition in Egypt when they stumble upon the tomb of Princess Ananka. Father finds the sacred Scroll of Life and, upon reading it, is driven mad by the sight of mummy Kharis (Christopher Lee) returning to life. Mehemet Bey (George Pastell), servant of the great god Karnak, vows vengeance on those who’ve dared to desecrate the tomb. 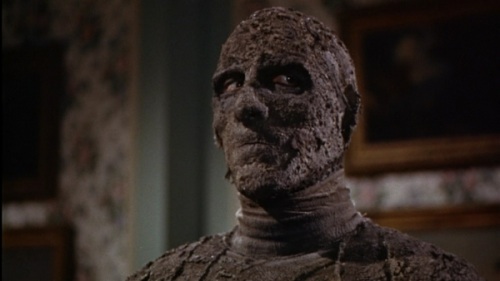 Three years later, in jolly old England, John (Peter Cushing) visits his dad in the sanitarium. Dad warns him of the curse of Karnak, but the son doesn’t believe him. Bey has ventured to England, and hired a pair of drunkards to transport some “relics” to his new abode. The relics in question contain the mummified remains of Kharis. When they pass by the sanitarium, Dad senses Kharis’ presence, smashing his windows, and the spooked drunks lose their cargo in a swamp. Bey goes to the swamp and using the Scroll of Life (no tanna leaves necessary), revives the mummy and sends him to kill the infidel.

John and Uncle Joe discuss the legend of Ananka and Kharis (in a flashback sequence to 2000 BC). They’re interrupted by Kharis, who throttles Joe. John shoots the monster but bullets don’t affect it. The police inspector (Edd Byrne) doesn’t believe John’s story, and neither does John’s wife Isobel (Yvonne Furneaux), who of course is a dead ringer for dead Ananka. Kharis returns to kill John, but is stopped in its tracks when it gets a load of Isobel. 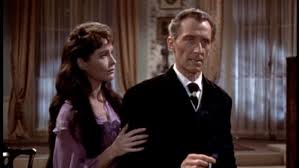 The inspector does some investigating, and comes around to John’s way of thinking. He warns John not to try anything rash, so naturally John pays a visit to his new Egyptian neighbor. Bey thought John was dead, but plays it cool. The two have an interesting debate abut religious beliefs, with John goading the foreigner about the “third-rate god” Karnak. Later, Bey leads Kharis back to the Banning home, and the mummy chokes John until Isobel interrupts again. Furious Bey commands Kharis to kill Isobel, but the mummy turns on its master, killing Bey and carrying Isobel off to the swamp. John and the police pursue them and the good guys finally win the day.

I can’t really fault the cast and crew for the failure of THE MUMMY. The Universal Mummy saga just isn’t on a par with the source material from previous Hammers (Mary Shelley, Bram Stoker, Arthur Conan Doyle). The “comic relief” drunkards make me long for Wallace Ford (Babe in the originals). Hammer’s Mummy movies, unlike their Frankenstein and Dracula series, were few and far between (1964’s CURSE OF THE MUMMY’S TOMB, 1967’s THE MUMMY’S SHROUD, 1971’s BLOOD FROM THE MUMMY’S TOMB). And also unlike the other series, there’s no continuity from one film to the next. Different movies, different mummies. Hammer did much better with their undead Count and mad Doctor Frankenstein. They should’ve let THE MUMMY stay in its tomb.