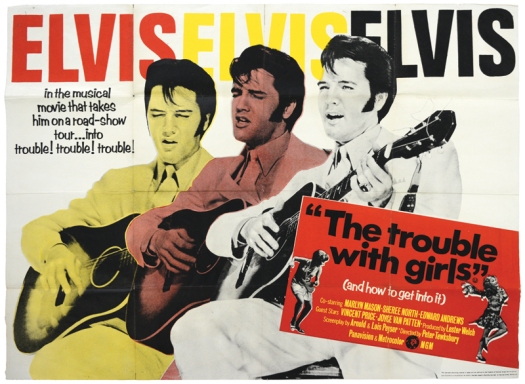 Elvis Aron Presley was born on this date in 1935. The King of Rock’N’Roll got the older generation “All Shook Up” when he burst on the national scene in 1956 with hits like “Heartbreak Hotel” and “Hound Dog”. He also made his first film that year, the Western LOVE ME TENDER, and was an immediate box office sensation. His following three films, LOVING YOU, JAILHOUSE ROCK , and KING CREOLE, were well done, but after his stint in the Army, and the success of 1961’s BLUE HAWAII, Presley’s 60’s movies followed a strict formula, thanks to manager Col. Tom Parker, with interchangeable titles like KISSIN’ COUSINS, HARUM SCARUM, and DOUBLE TROUBLE.

By the late 60’s, things had changed. The Beatles  were top of the pops, the psychedelic revolution was in full effect, and Elvis hadn’t had a hit record in a few years. The movies were still profitable, but lacked energy. Presley’s 1968 Comeback TV Special put The King back on his throne, and he ready to move with the times. Reportedly, he was offered the Jon Voight part in MIDNIGHT COWBOY, which the Colonel adamantly refused to let him do, and Glen Campbell’s role in TRUE GRIT, the Colonel again vetoing on the basis of being billed lower than John Wayne (really, Colonel?). One of Elvis’ last movies was THE TROUBLE WITH GIRLS, a departure from the usual formula casting Presley as the boss of a traveling Chautauqua show in 1927 Iowa. 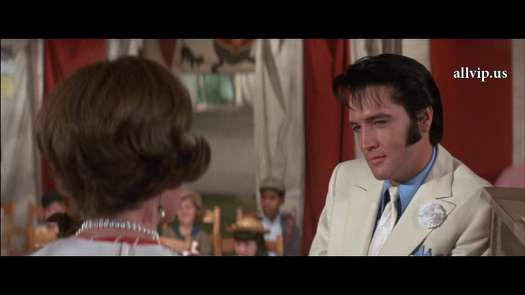 Elvis is the white-suited, cigar smoking Walter Hale, leader of the troupe of actors, orators, and musicians who pull into the sleepy town of Radford Center. His “Story Lady” who runs the children’s pageant, Charlene, is a union-advocating proto-feminist, refusing to give the mayor’s daughter the lead, preferring the much-more talented Carol. Carol’s mother Nita is constantly being sexually harassed at work by her druggist boss Wilby, and wants a better life for her kid. Young Betty wants to leave small town life behind too, and is eager to get noticed.

There’s also an illegal blackjack game going on by the riverbank, run by Chautauqua worker Clarence, and when Wilby gets in a fight after accusing the dealer of cheating, his body’s found floating in the river the next day. Clarence is arrested for murder, but Walter discovers Nita did the deed, and finds a way to help her and profit from it by having her confess before a live audience. Charlene is appalled at his exploitation of her, and Walter’s charlatan attitude in general, and quits the company, but sly Walter figures out a way to get her thrown out of town and back on the train for the next stop.

Walter Hale is a change of pace role for Elvis, as is the film. He does get to sing, but his musical moments are few and far between. His lead Bible Singer gets ill, so he fills in on the traditional Gospel number “Swing Down Sweet Chariot”. He does a bluesy rendering of “Clean Up Your Own Backyard”, and does an introspective “Alone” at the piano near the end. There’s a few bits and pieces of vocalizing, but mainly Elvis acts, and while Walter Hale’s no Joe Buck or Ranger LaBoeuf, it’s certainly different than his usual leading roles, and Elvis does a fine job. 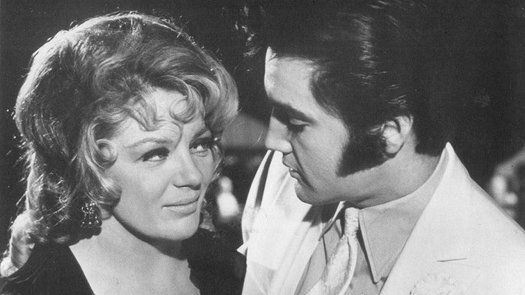 Presley’s surrounded by a cast of pros. Marlyn Mason (Charlene) is best known for her TV roles. Sheree North (Nita) was a 50’s starlet in HOW TO BE VERY, VERY POPULAR and THE LIEUTENANT WORE SKIRTS, and later appeared as The Duke’s ex-love in THE SHOOTIST . Edward Andrews (Walter’s assistant Johnny) is always good. Dabney Coleman’s at his sleazy best as Wilby. Nicole Jaffe (Betty)may not look familiar to you, but you’ll recognize her voice… she’s the voice of Velma from SCOOBY DOO! (Frank Welker, who voiced Fred, is also in the cast) Anissa Jones (little Carol) was Buffy on TV’s FAMILY AFFAIR.

There are some fun cameos here. Vincent Price plays the erudite Mr. Morality, giving the crowd a lecture on the evils of sin as only Price can. John Carradine pops up as Mr. Drewcolt, a Shakespearian actor (Betty: “Do you think Romeo and Juliet had pre-marital relations?” Drewcolt: “Only in the Des Moines company”). Carradine even gets to recite a snippet of the “To be or not to be” soliloquy from “Hamlet”, which must’ve pleased him no end! Joyce Van Patten is comical as distance swimmer Maude, who discovers Wilby’s body.

THE TROUBLE WITH GIRLS is entertaining, though anachronistic in places (all the women wear mini-skirts, for example), a solid comedy-drama that gave Elvis Presley a chance to break out of the formulaic “teen musicals” he was getting too old for anyway. There was one more movie on the way, CHANGE OF HABIT with Mary Tyler Moore, before his film career ended, with only a couple of tour documentaries in the 70’s before his tragic death in 1977 at age 42. Elvis left an indelible mark on the world of music, but in movies only a handful tested his mettle as an actor. THE TROUBLE WITH GIRLS tries to break the “Elvis movie” mold, and will satisfy even non-Presley fans. Happy birthday, King Elvis, long may you reign!