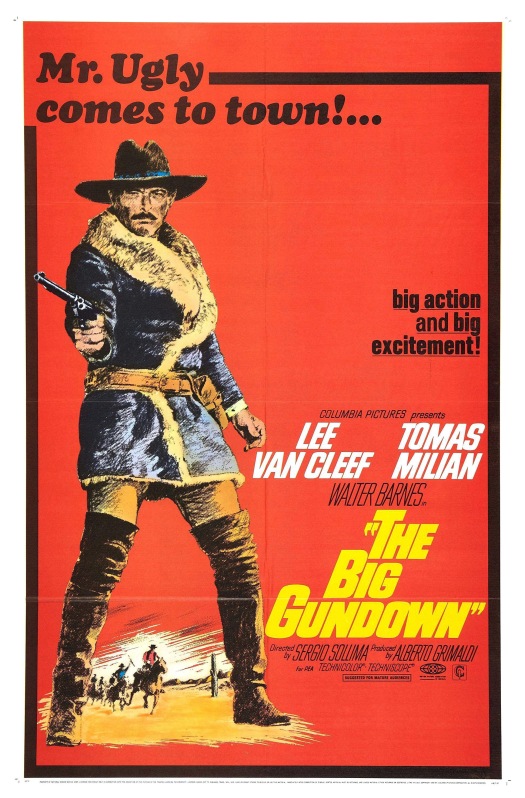 I’ll be the first to admit I’m no expert on Spaghetti Westerns. I’ve probably seen more than the average filmgoer though, and have learned to appreciate them  over the years. If I were to make a Top Ten favorite film list, Sergio Leone’s THE GOOD THE BAD AND THE UGLY would definitely make the grade. Recently I watched THE BIG GUNDOWN for the first time, and while it doesn’t quite measure up to classic status, it does serve as a good example of what the genre’s all about.

Lee Van Cleef was fresh off his success in two Leone/Clint Eastwood Spaghettis (FOR A FEW DOLLARS MORE and the aforementioned film) when he was cast in this Sergio Sollima saga. Van Cleef, who struggled for years as a villainous second banana in Hollywood, was now an international star, and THE BIG GUNDOWN was his first leading role. He plays the steely-eyed, steel nerved Jonathan Corbett, a fast-drawing ex-bounty hunter offered a chance to run for Senate by filthy rich Texas politician Brokston. Corbett’s asked to perform one last hunt by bringing in Cuchillo, accused of raping and killing a 12-year old girl. Corbett tracks the elusive Cuchillo through most of the film in a series of action-packed and sometimes humorous set-pieces. Their cat-and-mouse game comes to a close in Mexico, when Corbett discovers things are not what they seem, and he’s just been a pawn in the rich man’s master plan.

Tomas Milian costars as the wily Cuchillo, and at first I didn’t know what to make of him. A happy-go-lucky rapist? It wasn’t until later in the film when the truth was revealed that I understood his character. Milian was a Cuban-born American who like Van Cleef found fame in Italian cinema. He became a Spaghetti star with FACE TO FACE and RUN MAN RUN, the only other two Westerns by director Sollima, who went on to make his mark in the Italian crime (‘poliziotteschi’) genre, beginning with 1970’s VIOLENT CITY, featuring Charles Bronson and Telly Savalas. Carlo Carlini’s excellent camerawork gives THE BIG GUNDOWN a big boost, and the location filming in Spain is gorgeous to behold.

The score is by the great Ennio Morricone, who’s still alive and composing at age 87. Morricone was recently Oscar nominated (his 6th) for THE HATEFUL EIGHT, and though he’s already been awarded a Lifetime Achievement Oscar, I hope he wins! The Italian icon’s filmography is far too lengthy to do justice here, but I’ll just name a few that may jog your memory. Besides the Leone/Eastwood trilogy, there’s THE BIRD WITH THE CRYSTAL PLUMMAGE, BUGSY, DANGER:DIABOLIK, DAYS OF HEAVEN, IN THE LINE OF FIRE, MY NAME IS NOBODY, ONCE UPON A TIME IN THE WEST, RED SONJA, THE THING, TWO MULES FOR SISTER SARA, and THE UNTOUCHABLES. And that’s just the tip of the Morricone iceberg! I’m a big Morricone fan, and can remember owning a copy of Hugo Montenegro’s single THE GOOD, THE BAD, AND THE UGLY, happily whistling it on my way to school. Good luck at the Oscars, Ennio!

THE BIG GUNDOWN was well worth watching and is recommended to fans of all Westerns, Spaghetti or not. Another thing I really dug about the movie is the opening theme, sung by Italian chanteuse Cristy (aka Maria Cristina Brancucci). I’ll leave you with that, hopefully to whet your appetite for viewing THE BIG GUNDOWN: