Sometimes while scrolling through the channels one come across a pleasant surprise. So it’s Saturday afternoon,a thundershower has cancelled my plan to hit the beach, the Red Sox don’t start for awhile, and I’m clicking the old clicker when I land on WELCOME TO MOOSEPORT. I wasn’t expecting much, just a way to kill time; instead, I found an underrated little gem of a comedy that kept me watching until the very end. 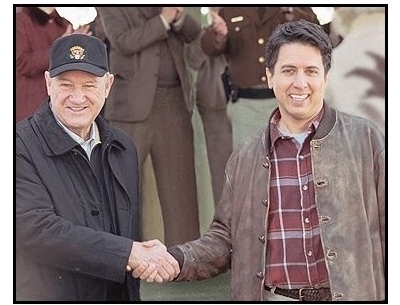 Don’t get me wrong, I’m not saying WELCOME TO MOOSEPORT is an undiscovered classic or anything like that. It’s just a solidly made piece of entertainment about small-town life starring Ray Romano (riding high at the time thanks to his successful sitcom EVERYBODY LOVES RAYMOND) and Oscar winning Gene Hackman. Romano uses his nebbishy TV persona to portray Mooseport, Maine’s local hardware store owner “Handy” Harrison, who gets involved in a mayoral campaign against Hackman’s Monroe “Eagle” Cole, ex-president of the good ol’ USA, who’s running so his grasping ex-wife will keep her paws off his vacation house. The race to the corner office takes a U-turn when Handy’s girlfriend Sally, tired of his inability to make a commitment, dates the former leader of the free world to make Handy jealous!

OK, it’s not exactly groundbreaking stuff, but the movie has more than it’s share of chuckles and some out-and-out guffaws. It kind of reminded me of something that Don Knotts would’ve starred in 30 or 40 years earlier, with Romano taking the small-town Everyman role in his stead. Ray’s funny here, and so is Hackman, who could play just about anything. This was Hackman’s final film before retiring and he nails it as usual. The supporting cast is top-notch as well, including the delightful Maura Tierney (ER, INSOMNIA) as tough State-of-Mainer Sally, Marcia Gay Harden (Oscar winner for POLLOCK) as Hackman’s trusted assistant (who of course carries a secret torch for him, just to even things out in the end), Fred Savage (THE WONDER YEARS) as a nerdy political operative, and the great Rip Torn as a sleazy consultant brought in to crank up the political heat. Christine Baranski pops up as the president’s vindictive ex-spouse, adding her own comic touch to the silliness, and that’s an uncredited Edward Herrmann as the debate moderator. And let’s have a shout-out please for the delectable Canadian actress Reagan Pasternak (BEING ERICA) in the small part of Mandy, who’s got a crush on her boss Handy!

I found out there was just as much talent behind the cameras as in front. Director Donald Petrie was responsible for a couple of old favorites of mine (MYSTIC PIZZA, GRUMPY OLD MEN); his father Daniel did both features (A RAISIN IN THE SUN, BUSTER AND BILLIE, FT. APACHE THE BRONX) and TV Movies (A HOWLING IN THE WOODS, MOON OF THE WOLF, the excellent MY NAME IS BILL W) of note. Screenwriter Tom Schulman was also an Oscar winner (DEAD POETS SOCIETY), penned the Disney comedy HONEY I SHRUNK THE KIDS and the insanely hilarious WHAT ABOUT BOB?, and served as writer/director of the cult classic 8 HEADS IN A DUFFEL BAG.

So yeah, WELCOME TO MOOSEHEAD was a pleasant diversion, a well made comedy with an impressive cast giving their all. Sure, it can be a little corny in places, but there’s nothing wrong with a little corn now and then – just ask Frank Capra. The movie seems to have been made in that Capra spirit, and I’m pretty sure Frank would’ve enjoyed it. I know I did!