Alistair MacLean’s adventure novels, filled with muscular action and suspenseful plot twists, thrilled moviegoers of the 60’s and 70’s in such big budget hits as THE GUNS OF NAVARONE and ICE STATION ZEBRA. In his first foray into screenwriting, 1969’s WHERE EAGLES DARE,  he adapted his own work to the silver screen, resulting in one of the year’s biggest hits, aided by the box office clout of Richard Burton and Clint Eastwood . The film’s a bit long, running over two and a half hours, but action fans won’t mind. There’s enough derring-do, ace stunt work, explosions, and cliffhanging (literally!) to keep you riveted to the screen! 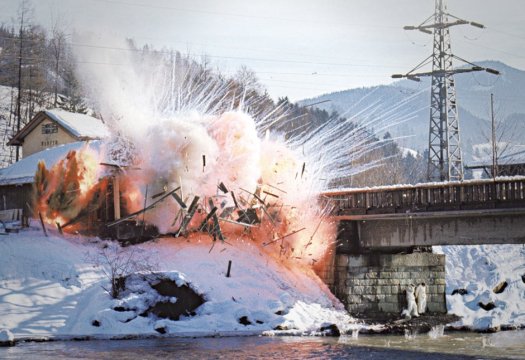 A lot of the credit goes to veteran stunt coordinator Yakima Canutt, in charge of all the action scenes as second unit director. Canutt staged some of the most exciting scenes in film history, from John Ford’s STAGECOACH to William Wyler’s BEN HUR, and certainly keeps things busy here. Director Brian G. Hutton was a former actor whose directing debut was 1965’s THE WILD SEED, starring the late Michael Parks . He and top British cinematographer Arthur Ibbetson worked together to beautifully frame every shot, and the spectacular view of the Austrian Alps (substituting for Bavaria) is breathtaking to behold. Hutton would work with Eastwood the following year on KELLY’S HEROES; he also helmed Frank Sinatra’s comeback THE FIRST DEADLY SIN and the 1983 Tom Selleck adventure HIGH ROAD TO CHINA.

A crack team of British commandos, led by Major Jonathan Smith (Burton) and American OSS Lt. Morris Schaffer (Eastwood), is assigned a dangerous mission. American General Carnaby, who holds important information about the upcoming European Second Front, has been captured by the Germans and is being held in the impregnable Schloss Adler (Castle Eagle) high in the Bavarian Alps. The team is tasked with raiding the castle and freeing Carnaby before the Nazis force him to talk. The seven men parachute down into the frozen tundra (one doesn’t make it), but there’s another member known only to Smith… British agent Mary Ellison (Mary Ure). In addition to the nearly impossible odds against them, Smith and Schaffer must contend with a murderer within their ranks!

Burton looks like he’s having fun playing Smith, a comic book hero to rival Nick Fury. Clint is cold as the Bavarian snow playing the assassin Schaffer, mowing down Nazis with the greatest of ease. The two men have a good chemistry, and I got a kick out of when Burton gets off a line calling Eastwood “a second-rate punk”. Mary Ure is right in on the action, machine gunning Nazis side by side with Clint. Why this woman was never a Bond Girl is a mystery to me! The plot, like all of MacLean’s works, takes many twists and turns along the way to get to the real reason for the mission, and you’ll enjoy trying to figure out what’s going to happen next.

There’s an odd connection among the supporting cast: all are noted for their roles in horror films! First, there’s everyone’s favorite Hammer vampire (sorry, Mr. Lee!) Ingrid Pitt , of THE VAMPIRE LOVERS and COUNTESS DRACULA fame, playing Heidi the barmaid/spy. Pitt’s part is small but pivotal to the story, and she’s a welcome presence in any film. Patrick Wymark’s (Col. Turner) horror resume includes THE SKULL, THE PSYCHOPATH, and BLOOD ON SATAN’S CLAW, among others. Anton Diffring (Nazi Col. Kramer) was in THE MAN WHO COULD CHEAT DEATH, CIRCUS OF HORRORS, MARK OF THE DEVIL PT. II, and THE BEAST MUST DIE. Shakespearean actor Michael Horden (Adm. Rolland) had roles in THE POSSESSION OF JOEL DELANEY and THEATRE OF BLOOD. Donald Houston (Capt. Christensen) played Dr. Watson opposite John Neville’s Sherlock Holmes, hunting Jack the Ripper in A STUDY IN TERROR. Houston also appeared in TALES THAT WITNESS MADNESS and CLASH OF THE TITANS. Ferdy Mayne (Nazi Gen. Rosenmeyer) is best known as Count von Krolock in Roman Polanski’s THE FEARLESS VAMPIRE KILLERS. Robert Beatty (Gen. Carnaby) was featured in SECRETS OF DR. MABUSE and Kubrick’s 2001: A SPACE ODYSSEY. And Derren Nesbitt (Gestapo Maj. von Hopper) starred as one of the grave robbers in the little seen BURKE AND HARE.

WHERE EAGLES DARE has plenty of action, exciting stunt work, is marvelously shot, and will whet any action lover’s appetite. It should be viewed on a big screen, where I saw it upon release, but is worth watching on “the telly”, as they say in jolly olde England. If you’re unfamiliar with Alistair MacLean’s adventure stories, you can begin here, or THE GUNS OF NAVARONE, ICE STATION ZEBRA, WHEN EIGHT BELLS TOLL, BREAKHEART PASS…  just steer clear of FORCE 10 FROM NAVARONE!