THE BLACK CAT has nothing to do with Edgar Allan Poe , but don’t let that stop you from enjoying this thoroughly dark, twisted film. Not only is it the first teaming of horror icons Boris Karloff and Bela Lugosi , it’s their only movie together that plants the two stars on equal ground. It’s also the best film ever made by cult director Edagr G. Ulmer , who’d never again get the opportunity to work at a major studio, or the chance to work with a pair of legends like Boris and Bela in one film.

Bela is Dr. Vitus Verdegast, eminent Hungarian psychiatrist, returning after 15 long years in a Russian prison camp to “visit an old friend” at Marmaros, “the greatest graveyard in the world”, where tens of thousands died during WWI. Vitus is forced by chance to spend the train ride with American honeymooners Peter and Joan Allison, he a “writer of unimportant novels”. They share a cab through rocky terrain during a blinding thunderstorm that causes the car to crash, injuring Joan. Vitus and the couple, along with Wedegast’s manservant Thamal, are forced to seek refuge at the fortress home of Vitus’s “friend”, Engineer Hjalmar Poelzig.

Boris is Poelzig, looking like the devil himself, whip thin and moving as slow as the living dead. The Austrian architect sold out his countrymen during the war, and has returned to the scene of his crimes. Vitus believes Poelzig has his wife and daughter, both named Karen, and has come for revenge, but his deathly fear of black cats paralyzes him. Poelzig is also the High Priest of a Satanic cult, and soon has designs on Joan, leading to a deadly game of chess for her immortal soul…

The Twin Titans of Terror play off each other well, with Bela the Avenging Angel to Boris’s Demonic Deacon. The censors had a fit when they read the script by Peter Ruric, demanding many changes, though Ulmer does gets away with a lot here. Poelzig’s home is a bizarre, Art Deco shrine to decadence, featuring a hall of dead women suspended in glass cases (including Vitus’s wife), a masterpiece of the macabre by Art Director Charles D. Hall and an uncredited Ulmer. The penultimate scene where Vitus, having tied Poelzig to his embalming rack, begins to skin the engineer alive, “slowly, bit by bit”, with a gleefully mad bug-eyed Bela, is shown in shadow, punctuated by Boris’s agonized screams, and is without a doubt one of the most gruesome of the 1930’s horror cycle. 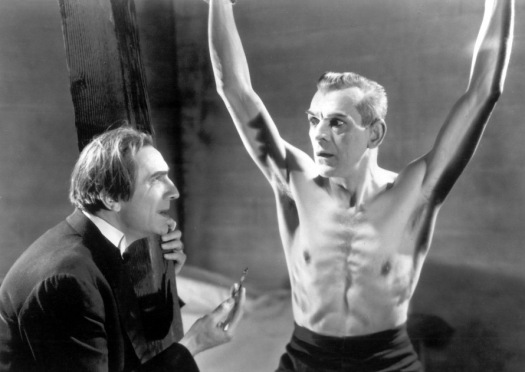 David Manners of DRACULA and THE MUMMY plays Peter, and though many deride him in this I thought he did a fine job. Jacqueline Wells as Joan was a stalwart of Universal ‘B’ films; she did much better when she moved to Warners in 1941 and changed her name to Julie Bishop. Others in the cast are Harry Cording (Thamal), Lucille Lund, Henry Armetta , and Egon Brecher. Familiar Faces in the devil’s cult include King Baggot, Symona Boniface, Lois January, and Michael Mark , as well as a familiar back of the head… that’s Ulmer’s future BLUEBEARD star John Carradine playing the organ!

THE BLACK CAT is the first horror film to feature a continuous music score, as Heinz Roemheld incorporates pieces from Bach, Chopin, Liszt, Schubert, Tchaikovsky, and that old Universal stand-by “Swan Lake”. The music adds to the film’s atmosphere, and though Carl Laemmle hated it, Ulmer insisted upon it, and would utilize classical music throughout his career. But it wasn’t the director’s stubbornness that caused him to be banned from the major studios, nor was it THE BLACK CAT’s graphic for their time scenes of horror, or the perverse nature of the material… it was love. Ulmer met and had an affair with Shirley Kessler Alexander, wife of Laemmle’s nephew Max, and the scandal landed Ulmer on Poverty Row for the rest of his life. Edgar and Shirley married in 1936, and together they collaborated  on all of Ulmer’s films until the end of his days. THE BLACK CAT is a masterpiece of the macabre, and a must for this Halloween season!