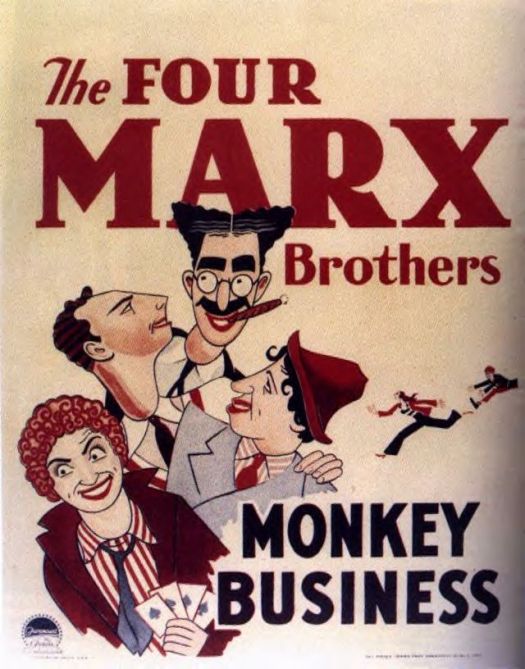 After filming their stage successes THE COCONUTS (1929) and ANIMAL CRACKERS (1930), The Four Marx Brothers made their first movie written directly for the screen. MONKEY BUSINESS showcases the anarchic comedy style the brothers were famous for in a very loosely plotted script by humorist S.J. Perelman and Will B. Johnstone (with “additional dialogue” by Arthur Sheekman) full of crazy comic moments.

The brothers play stowaways on an ocean liner bound for America who get mixed up with a pair of rival gangsters. Groucho, of course, gets mixed up with gangster Briggs’s wife, the wonderful Thelma Todd. She takes the role usually reserved for Margaret Dumont, but her youth and beauty give it a different spin. Groucho and Thelma are perfect foils, whether it’s their comic banter (Thelma: “My husband will wallop me” – Groucho: “Always thinking of your husband. Couldn’t I wallop you just as well?”) or their zany dance routines. Thelma would make one more with the Marxes (HORSE FEATHERS, 1932) before her tragic death at age 29 in 1935. 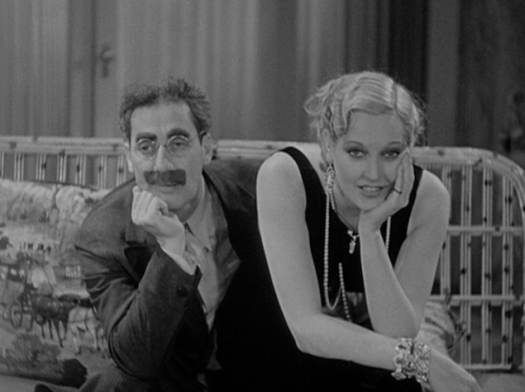 The jokes come fast and furious. Groucho’s timing, freed from the conventions of the stage,is better then ever, his rhythmic one-liners roll off his tongue (‘Is it true you wash your hair in clam broth?”) The eye-rolling, eyebrow raising, and rat-a-tat delivery are far superior here than in the first two films. Harpo’s sight gags (the frog in the hat, the Punch and Judy scene) are great, and he’s still chasing every girl in sight. Chico mangles the English language like no one else can, and his trick piano playing’s always a treat. Even Zeppo does well in a larger than usual role as the love interest for rival gangster Helton’s daughter. 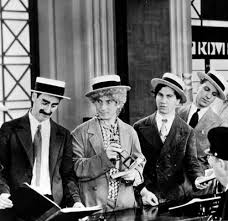 The most famous scene is when the four brothers try to get off the ship by impersonating Maurice Chevalier singing “You Brought A New Kind of Love to Me”. When the other three fail, Harpo almost gets away with it until it’s discovered he has a phonograph strapped to his back! There’s plenty of slapstick to go along with the non-stop puns and back-and-forth verbal gymnastics. Director Norman Z. McLeod (who also did the follow-up HORSE FEATHERS) was a gifted comedy director who guided pros like W.C. Fields (IT’S A GIFT, 1934) and Red Skelton (PANAMA HATTIE, 1942), as well as several Bob Hope vehicles (ROAD TO RIO, 1947, THE PALEFACE, 1948). McLeod was also responsible for the classic ghost comedy TOPPER (1937) and the all-star IF I HAD A MILLION (1932). 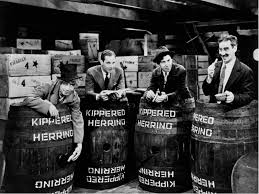 MONKEY BUSINESS is right up there with DUCK SOUP as one of the Marx Brothers best. I’m a huge fan of their early Paramount movies. That let-it-all-hang-out spirit just really wasn’t there at MGM. Most critics think different, that the brothers needed to be reigned in. I disagree. I like the undiluted, anything goes style found in MONKEY BUSINESS and their four others at Paramount. If you like your Marx Brother straight with no romantic subplot chaser, MONKEY BUSINESS will not disappoint!

8 Replies to “Straight No Chaser: The Marx Brothers in MONKEY BUSINESS (Paramount, 1931)”