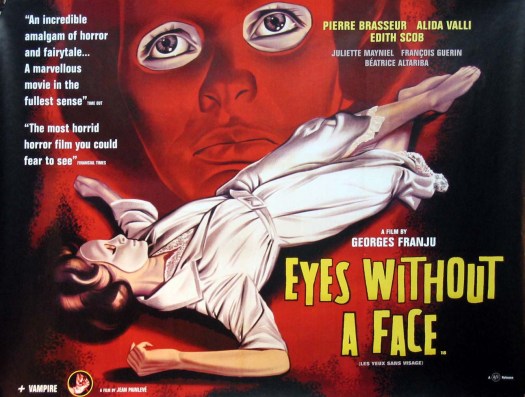 From the early films of Georges (A TRIP TO THE MOON) Melies, to the horrors of H.G.Clouzot (LE CORBEAU, DIABOLIQUE), to the vampire madness of Jean Rollin, France has a long history with le cinema fantastique. EYES WITHOUT A FACE is one of the most eerie of all French horrors, it’s dreamlike quality capturing the viewer, even with subtitles. I’m not a big fan of foreign films, but EYES WITHOUT A FACE stood out to me as a perfect example of how quiet horror can be just as effective as full-throttle terror.

The story unfolds slowly, deliberately, as we see a woman (Alida Valli) driving down a lonely highway. There’s someone or something in her backseat, bundled up in a hat and topcoat. The woman pulls over when a car comes behind her, nervous, scared. When it passes, she carries what we now see as a female corpse, dropping it into the Siene River. The police fish it out, and Dr. Genessier (Pierre Brasseur) identifies it as his missing daughter, Christiane. A funeral is held, where we discover the woman is Genessier’s assistant Louise. Furthermore, the corpse is not Christiane at all…she’s at the doctor’s villa, victim of a disfiguring car crash. Christiane (Edith Scob) wears a mask ala’ The Phantom of the Opera to hide her ugliness. Dr. Genessier was the driver who caused Cristiane’s disfigurement, and he’s been experimenting with skin grafts to give his child a new face, first by practicing on dogs, now using young women. To achieve his goal, Dr. Genessier is cutting off their faces and transplanting them onto daughter Christiane. 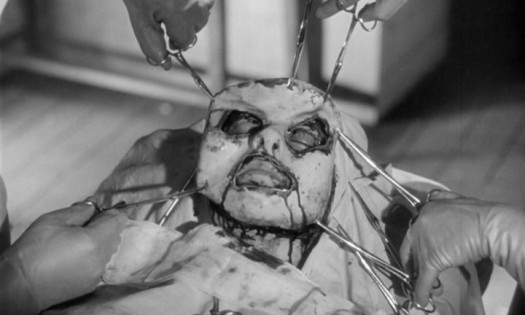 The scenes of Genessier and Louise performing their gruesome operations in his brightly lit laboratory are vivid for a 50s film, moreso then even the British Hammer horrors. You can almost feel them peeling the face off ever so delicately, sending shivers down the viewer’s spine (or at least this viewer!). Most of the movie is done in stark white settings, emphasizing the fact that horrors don’t always happen in the dark. Christiane’s blank-faced mask shows us only her eyes, the fear and horror etched within them. Sound is used to good effect as well, the constant barking of the dogs and chirping of birds conveying the loneliness of Christiane. The denouement to EYES WITHOUT A FACE is particularly frightening, with Genessier getting his comeuppance courtesy of Christiane.

Cinematographer Eugen Schufftan does a commendable job utilizing light to contrast the bizarre goings-on. Schufftan was one of Europe’s most respected cinematographers. Fleeing his native Germany during the Nazi era, he came to America. Since Scufftan was not in the union, he worked uncredited as cinematographer (often getting a consultant credit) on films by countryman Edgar G Ulmer (HITLER’S MADMAN, BLUEBEARD, STRANGE ILLUSION). Schufftan was warded an Oscar for his black & white filming of THE HUSTLER. Director Georges Franju was a film archivist who’s work as director included the serial flavored JUDEX (1963). EYES WITHOUT A FACE was based on a novel by Jean Roden, and adapted for the screen by the team of Pierre Boileau and Thomas Narcejac. The duo was responsible for the stories that were filmed as DIABOLIQUE, VERTIGO, and Body Parts. Maurice Jarre’s jaunty, incongruous score adds to the film’s oddness. Jarre was one of the most successful composers working in film, with Oscars given for LAWRENCE OF ARABIA, DOCTOR ZHIVAGO, and A PASSGAE TO INDIA. Other notable Jarre works include RYAN’S DAUGHTER, THE MAN WHO WOULD BE KING, DEAD POETS SOCIETY, and GHOST.

The cast members were well known in France, but none made an impact here in the States save Alida Valli. The beautiful actress made her American debut in Alfred Hitchcock’s THE PARADINE CASE, then was featured in the classic thriller THE THIRD MAN. Returning to work in Europe in the mid-50s, Valli continued her success abroad, ending her screen career appearing in Dario Argento works like SUSPIRIA and INFERNO. EYES WITHOUT A FACE was first seen in this country in a butchered and dubbed version titled THE HORROR CHAMBER OF DOCTOR FAUSTUS, double billed with THE MANSTER. Thankfully, the original version was restored and shown in this country in 2003. Now readily available, the film is hailed as the classic it truly is, its influence seen in horror movies made around the world. Don’t let the subtitles steer you away from EYES WITHOUT A FACE, for you’ll be missing one of the scariest films in le cinema fantastique.