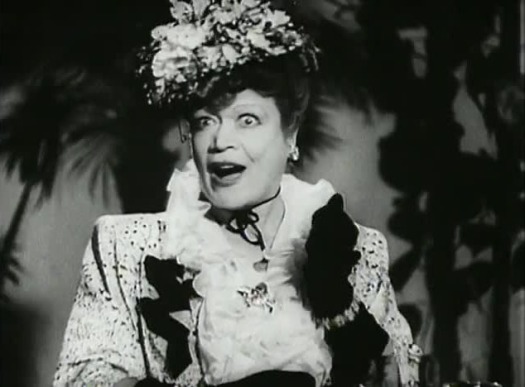 Esther Howard (1892-1965) graced the screen in over 100 appearances, but it’s her work in the shadowy world of film noir for which she’s best remembered. A deft comedienne, Esther was also a member in good standing of Preston Sturges’ stock company, cast in seven of his films. Her matronly looks and acting talent allowed her to play a rich, haughty dowager or drunken old floozy with equal aplomb. Esther may not have been a big star, but her presence gave a lift to any movie she was in, big or small.

She was already an established stage actress when she entered movies in 1930. Talkies were all the rage, and Esther began her screen career appearing in Vitaphone shorts opposite the likes of Franklin Pangborn. Her first feature was 1931’s THE VICE SQUAD, a Pre-Code drama starring Kay Francis and Paul Lukas, with Esther billed sixth. More movies found her down in the cast lists, or sometimes unbilled: MERRILY WE GO TO HELL (1932), THE FARMER TAKES A WIFE (’35), DEAD END (’37), and REBECCA OF SUNNYBROOK FARM (’38) were among her many credits.

Esther’s flair for comedy found her supporting many classic comics of the era. Wheeler & Woolsey’s COCKEYED CAVALIERS (’34) places her square among the team’s medieval mirth. The short THE MISSES STOOGES (’35) has Esther hosting a swanky society party ruined by Thelma Todd & Patsy Kelly. The bawdy KLONDIKE ANNIE (’36) pairs her with the inimitable Mae West. 1939’s THE GRACIE ALLEN MURDER CASE sees her briefly as a florist. In MY FAVORITE BLONDE (’40), she’s involved with Bob Hope’s zany shenanigans. Laurel & Hardy’s THE BIG NOISE (’44) has Esther on the make for Ollie. She has a bit in the Three Stooges short IDLE ROOMERS (’44), and played Andy Clyde’s wife in seven of his Columbia shorts.

Her association with writer/director Preston Sturges began with his first in the director’s chair, 1940’s THE GREAT MCGINTY. From there, Esther went to  appear in six more Sturges classics. SULLIVAN’S TRAVELS   (’41) casts her as a man-hungry farm widow setting her sights on Joel McCrea. THE PALM BEACH STORY (’42) finds Esther married to the wealthy “Wienie King”. She had three Sturges films released in 1944: MIRACLE OF MORGAN’S CREEK has Esther embroiled in the saga of Trudy Kockenlocker (Betty Hutton), she serves as a dentist’s guinea pig in THE GREAT MOMENT, and plays Mayor Raymond Walburn’s wife in HAIL THE CONQUORING HERO. Her last with Preston Sturges was also his last American-made film, 1949’s THE BEAUTIFUL BLONDE FROM BASHFUL BEND.

Despite all this, it is her roles in film noir for which Esther Howard is most closely associated. In 1944’s MURDER, MY SWEET , she plays a key role as the duplicitous drunk Jessie Florian, who tries to throw Philip Marlowe (Dick Powell) off Velma’s trail. Her part as the waitress in Edgar G. Ulmer’s DETOUR (1945) is small, but her presence adds much to this low-budget masterpiece. In DICK TRACY VS CUEBALL (’46), she has a meaty role as Filthy Flora, proprietor of the Dripping Dagger. My favorite Esther Howard noir is Robert Wise’s BORN TO KILL , where she plays nosy boarding house owner Mrs. Kraft, menaced by Lawrence Tierney and his sneaky sycophant Elisha Cook Jr. She closed out her film noir career with a pair of 1949 films: Mark Robson’s CHAMPION (as boxer Kirk Douglas’s mother) and THE CROOKED WAY (a bit as a hotel proprietor).

Esther Howard closed out her film career completely by returning to comedy as Joe Besser’s aunt in the 1952 short CAUGHT ON THE BOUNCE. She’s still remembered today for both the dark worlds of film noir and classic comedy. Actresses like Esther Howard are part of what makes watching these films so special, their small but memorable contributions enhancing our viewing experience. All hail Esther Howard!