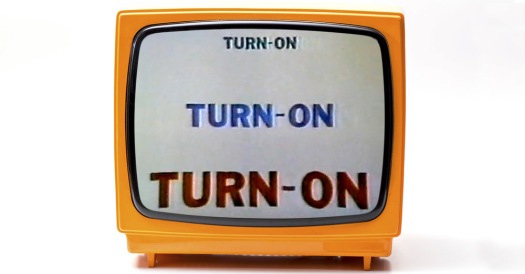 TURN-ON made its debut February 5, 1969 on the ABC network. It was promptly cancelled a day later. Quicker at the ABC affiliate in Cleveland: after the first eleven minutes! Why? Was it that bad? What was all the hubbub about?

The brisk half-hour was produced by Ed Friendly and George Schlatter, the duo behind NBC’s highly successful ROWAN AND MARTIN’S LAUGH-IN, a subversive comedy-variety series that spoofed just about anything in its path. It was hoped TURN-ON, even more outrageous than its predecessor,  would be a hit with the same hip audience. But the world wasn’t quite ready for this non-stop assault on the senses, which used quick blackout sketches, animation, stop-motion, early computer graphics, a synthesized score, and worse of all- NO LAUGH TRACK!!

The premise of TURN-ON was that it was made by a computer, a novelty back before the days when everyone had a PC or laptop. Yes, it was the Stone Age! The jokes and gags concerned sex, sex, sex, and more sex. This was really what caused TURN-ON to be turned off by ABC’s affiliates; the smutty humor was too much for American audience’s delicate palettes.

Tim Conway was the first (and only) guest host. TURN-ON’s ensemble featured comic actors Hamilton Camp, Teresa Graves (who went on to join LAUGH-IN and the later 70’s cop show GET CHRISTIE LOVE!), Chuck McCann, and Mel Stewart. After Cleveland pulled the plug, West Coast stations in Denver, Portland, and Seattle, having viewed the East Coast feed in horror, refused to air the show at all. TURN-ON was replaced the very next week by a movie (1966’s THE OSCAR- talk about going from bad to worse!), then a revival of the saccharine, sanitary King Family Singers.

I couldn’t find any clips to show here, so I can just say from memory TURN-ON was strange but funny. Of course, I was only ten at the time, and thought anything smutty and slightly dirty was funny, even though I probably didn’t get half the jokes! Today TURN-ON would be considered relatively mild compared to what we see on the boob tube. It was a groundbreaker that was waaaay ahead of its time.