I used to devour those Doc Savage pulp novels reissued as paperbacks by Bantam Books. You know, the ones with those cool James Bama covers? They were filled with action, adventure, intelligence, and good humor, as written by Lester Dent under the pseudonym ‘Kenneth Robeson’. Doc himself was a paragon of goodness, trained from birth in the arts and sciences, a perfect physical specimen adept at all the fighting disciplines with near super-human strength. In fact, one could make a case for Doc Savage as the world’s first mass-market superhero, the Man of Bronze predating DC’s Superman (The Man of Steel) by a good five years.

Doc’s amazing adventures screamed for a screen treatment, but it wasn’t until 1975 that producer George Pal bought the character’s rights from Dent’s widow Norma and made DOC SAVAGE: THE MAN OF BRONZE. Pal, whose credits include sci-fi classics like WHEN WORLDS COLLIDE, WAR OF THE WORLDS, and THE TIME MACHINE, seemed like the right man for the job. He hired handsome, muscular former TV Tarzan Ron Ely to portray Doc, and director Michael Anderson, who’d helmed the WWII action flick THE DAM BUSTERS and the Oscar-winning AROUND THE WORLD IN 80 DAYS. What could possibly go wrong?

Plenty. All the right elements were in place: Doc’s Fabulous Five band of brothers (Monk, Ham, Renny, Johnny, Long Tom), his Fortress of Solitude, a 1930’s setting, a script based on Doc’s origin story (with parts of two other novels incorporated), and plenty of gadgets. But Pal, his co-screenwriter Joe Morhaim, and Anderson chose to go the camp route, spoiling the film. Frank DeVol adapted John Philip Sousa marches as his score, and it’s horrible, ruining the action scenes. While Dent’s books always carried a hefty amount of humor, here it’s played to the Nth degree, and not always intentional. Doc’s eyes literally twinkle thanks to animation, every mode of transport has the stylized Bantam ‘Doc Savage’ logo on it. The film has the look and feel of a bad TV movie, as Pal was aiming for a series akin to the 1960’s BATMAN, but the camp craze was long out of fashion. The whole thing fails to capture the spirit of the Savage novels, treating the material as a joke. 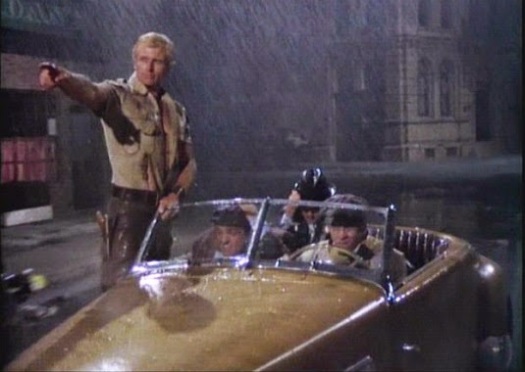 At the very end, DOC SAVAGE: THE ARCHENEMY OF EVIL is advertised as coming soon. Since the first film tanked miserably, it never got made. I’m glad it didn’t, because I want to see a more straightforward version of Doc put on the Silver Screen. In May of 2016 it was announced a new version would be filmed, starring Dwayne “The Rock” Johnson and directed by Shane Black. We’re still waiting for that to materialize. Meanwhile, fans of the Man of Bronze can stick to rereading those Bantam paperbacks, and skip this waste of time.

9 Replies to “I’ll Be Superamalgamated!: DOC SAVAGE, THE MAN OF BRONZE (Warner Brothers 1975)”