Harold Lloyd  made a smooth transition from silent films to talkies beginning with 1929’s WELCOME DANGER. Unlike Charlie Chaplin (who stubbornly clung to making silents until 1940), and Buster Keaton (whose MGM contract took away much of his artistic freedom), Lloyd retained both his comic visual style while integrating verbal gags in the new medium and kept control of the pictures he made. And while his popularity had begun to wane by the 1930’s, Harold Lloyd’s early talkies are definitely worth watching – because they’re flat-out funny! Case in point: 1932’s MOVIE CRAZY.

MOVIE CRAZY is one of those “Hollywood-behind-the-scenes” stories you know I love so much, so it automatically scored cool points with me! Kansas farm boy Harold Hall lives with his parents and daydreams of being a movie star. One day, he sends his picture and a letter to Planet Films exec O’Brien – only the inept Harold accidentally sends a pic of a collar-ad, good-looking guy instead of his nerdy self! O’Brien sends a reply asking Harold to come to Hollywood for a screen test, and the bumbling bumpkin goes west, immediately causing havoc at a location shoot. It’s also here he first lays eyes on actress Mary Sears, in character as a Spanish senorita.

One funny scene (among many) has Harold caught in a rainstorm, chasing his errant shoe as it floats down the street, finally landing on his keister and splashing Mary, now out of costume (though he doesn’t realize it’s the same person) and having car problems. His attempts to help her result in a series of comic mishaps, and earns him the nickname “Trouble”. She takes him home to get out of his wet clothes (wearing one of her outfits!) and her actor boyfriend, the drunken lout Vance, bullies our Harold. His screen test is a bust, though he’s led to believe he’s a hit, and Mary dumps him when she finds out he’s cheating (actually with her, as the senorita!), all culminating with Harold attending a swanky studio party, where he mistakenly switches jackets with a stage magician, causing more chaos with a water-squirting boutonniere, rabbits, and a box of white mice. Dejected, rejected, Harold gets beat up at the studio by the obnoxious Vance. When he comes to, a scene being filmed makes him think Vance is really assaulting Mary, and he finally vanquishes the bully, winding up with a studio contract, and Mary to boot! 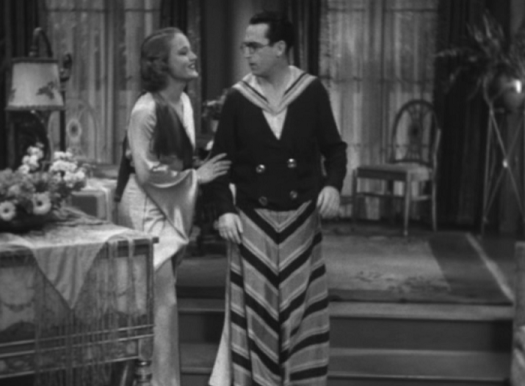 There’s so many laughs in MOVIE CRAZY I could barely stop and take notes! Harold’s clumsy, naïve yet likeable persona serves him well as the hayseed in Hollywood, and he and costar Constance Cummings (Mary) make a cute couple. Spencer Charters as O’Brien takes the brunt of Harold’s ineptitude, and Kenneth Thomson’s Vance makes a hissable villain. Among the Familiar Faces are Louise Closser Hale as the studio boss’s dowager wife, Arthur Housman as a soused partygoer, and Grady Sutton in a brief but memorable cameo. The backstage scenes are well done, giving us a glimpse of those halcyon days of early talkies.

A plethora of writers worked on MOVIE CRAZY: the story’s credited to Felix Adler , John Grey, and Agnes Christine Johnson, screenplay to Vincent Lawrence, and ‘continuity’ to Lex Neal, Frank Terry, and Clyde Bruckman (with an uncredited assist to Lloyd and “Nancy and Sluggo” creator Ernie Bushmiller!). Bruckman also gets the director’s credit, though Lloyd had to take over much of the time due to Bruckman’s hard-drinking ways. Clyde Bruckman had been around since the early days of slapstick comedy, and worked with all the greats: Buster Keaton, W.C. Fields , The Three Stooges , Laurel & Hardy, so many others. His drinking curtailed his directorial career (his last was Fields’ MAN ON THE FLYING TRAPEZE), but he could still get work as a gag man. However, Bruckman had a habit of “borrowing” (some would say stealing) old material and reworking it (The Stooges’ short LOCO BOY MAKES GOOD repeats the magician’s coat routine almost verbatim). Lloyd and his lawyers sued Bruckman’s then-employers, Universal, when evidence of this “borrowing” became blatant, and Clyde Bruckman never worked in features again. He was persona non grata around town, though  Abbott & Costello did hire him for their TV series, where his penchant for recycling other comedians’ old material once again found him in hot legal waters. Drinking heavily, unemployable, and nearly destitute, Bruckman borrowed a gun from his old friend Keaton and blew his brains out in a restaurant bathroom in 1955.

*ahem* well, that was a bit of a downer, wasn’t it? Instead of pondering the fate of the unfortunate Clyde Bruckman, let’s instead celebrate Harold Lloyd and MOVIE CRAZY, a hilarious concoction of comedy from an artist too often overlooked by modern audiences: