The comedy team of Bert Wheeler and Robert Woosley  join forces with Our Gang’s Spanky McFarland in KENTUCKY KERNALS, directed by Hal Roach vet George Stevens. Sounds like the perfect recipe for a barrel of laughs, right? Well, while there are some laughs to be had, the (then) recent enforcement of the Production Code finds W&W much more subdued than in their earlier zany efforts, and playing second fiddle to both Spanky’s admittedly funny antics and the plot at hand, a takeoff on the famed Hatfield-McCoy feud. 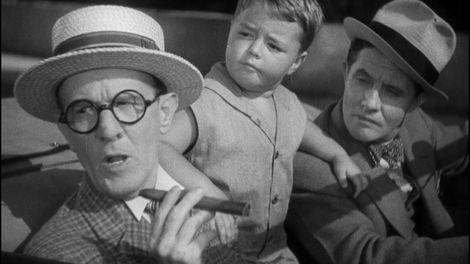 Weirdly enough, the film starts off with a lovelorn man attempting suicide by jumping off a bridge. Fortunately for him, he lands in a fishing net owned by down-on-their luck vaudevillians Elmer (Woolsey) and Willie (Wheeler), living in a waterfront shack. The two convince him to adopt a child, and go to the orphanage, where they find cute little Spanky, who has a thing about breaking glass! The man winds up eloping with his true love, and the boys wind up in charge of the glass-smashing Spanky! 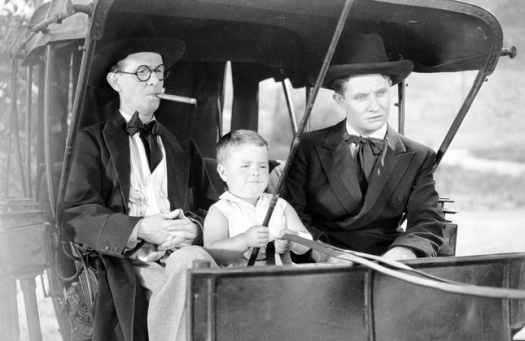 Informed Spanky is sole heir to “a large Kentucky estate”, the trio head south, with Willie falling for pretty Gloria Wakefield aboard the train. When they arrive in the Bluegrass State, they get embroiled in a bitter feud between the Wakefields and Spanky’s clan, the Milfords. W&W manage to mend fences between the two warring factions, until Spanky pops a bottle of champagne. The Wakefields think it’s a gunshot, and the feud is back on in full force…

There are plenty of quick quips and good sight gags here, but that anarchic spirit Wheeler & Woolsey brought to  their Pre-Code comedies is sadly lacking. There are missed opportunities as well; Marx Brothers nemesis Margaret Dumont is utterly wasted as the orphanage headmistress. Just imagine the fun Woolsey could have had jousting verbally with Miss Dumont a few short years earlier! Ingenue Mary Carlisle (who died this past August at age 104!) is appealing as Gloria, but not given very much to do except look pretty. Willie Best is unfortunately stereotyped as the Milford handyman Buckshot, although he does play off Spanky well. Even the main song “One Little Kiss” isn’t up to the usual standards of Bert Kalmar and Harry Ruby (“I Wanna Be Loved By You”, “Three Little Words”, “A Kiss To Build  A Dream On”). 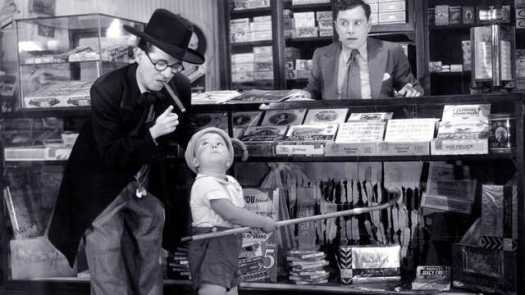 Spanky of course steals every scene he’s in with his antics and facial expressions. The six-year-old tyke was already a show biz veteran, having debuted with Our Gang two years earlier and quickly becoming the group’s most popular member. In fact, the film itself feels more like a Hal Roach comedy than a Wheeler & Woolsey outing, with Dorothy Granger and Charlie Hall appearing in small roles. Noah Beery Sr. (whose son later worked for Roach) plays the meanie Col. Wakefield, while Lucille LaVerne is Milford matriarch Aunt Hannah.

KENTCUCKY KERNALS is a pleasant enough if minor comedy, but a disappointment for Wheeler & Woolsey fans thanks to the Code restrictions. It takes away the sense of chaos they brought to the screen and turns them into just another pair of comics. Damn you, Joseph Breen!