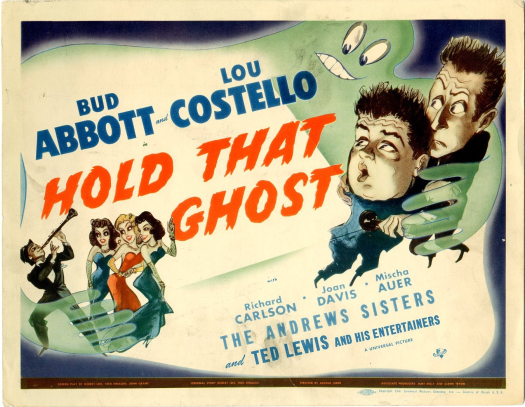 Before they met Frankenstein, The Mummy, or Dr. Jekyll & Mr. Hyde, Bud Abbott and Lou Costello made their first foray into scary territory in 1941’s HOLD THAT GHOST. This was the boys’ third released film that year, and one of the team’s all-around best. Bud and Lou are two relief waiters at a swanky nightclub (is there any other kind in theses 40s flicks?). Ted Lewis (“Is everybody happy?”) and his orchestra provide the entertainment, along with singing sensations The Andrews Sisters. Of course the boys get fired because of Lou’s bumbling, and return to their regular jobs as gas pump jockeys. Along comes gangster Moose Matson, and clumsy Lou accidentally fires a gun he finds in Matson’s back seat. This gets the cops attention, and they chase down Matson with Bud and Lou in tow. Matson is killed by the police and, according to his will, the boys (being “the last people with me when I die”)  inherit his roadhouse, the Forrester’s Club.

Crooked lawyer Bannister and his associate Charlie Smith are trying to get ahold of Matson’s hidden loot. They set Bud and Lou up with a ride from a disreputable bus service. But the greedy driver books some other fares,including professional radio “screamer” Camille Brewster, pretty young Norma Lind, and nerdy scientist Dr. Jackson. The driver strands them all at the Forrester’s Club, a spooky, cobweb-infested, rundown hotel. That’s when the fun begins, as they encounter dead bodies, hidden rooms, clutching hands, and the usual things one finds in “old, dark house” movies. The boys end up finding the hidden money and chase off the villians. Dr. Jackson discovers the waters at the roadhouse have “miraculous therapeutic powers”, and the duo turn the old place into their own swanky nightclub, complete with Ted Lewis and company. The Andrews Sisters swing out to their hit “Aurora” and ‘everybody’s happy’ at the end. 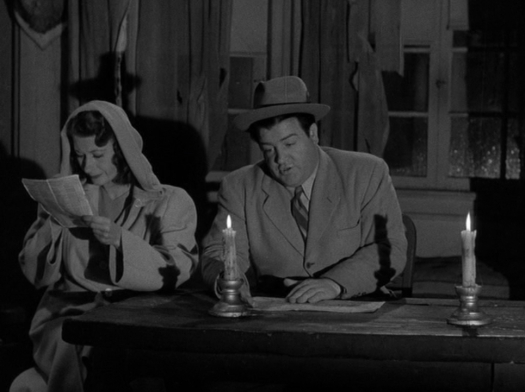 Abbott and Costello were at their peak in this entry, and their incredible wordplay still astounds me. I especially enjoyed the “figure of speech” routine, aided by funny girl Joan Davis (Camille). Davis, a veteran of radio and vaudeville, more then holds her own with Lou in the slapstick department, almost stealing the film. Their comic dance sequence is hysterical, as is the old “moving candle” routine (later reprised in ABBOT & COSTELLO MEET FRANKENSTEIN, on top of Dracula’s coffin). Joan Davis went on to star in the early 50s television sitcom I MARRIED JOAN, and passed away in 1961.

A Universal cast is worth repeating, and this film’s no exception. The studio’s resident “Scream Queen” Evelyn Ankers plays Norma, and shows a comedic side not usually seen in her fright films. Richard Carlson (Dr. Jackson) was just beginning his picture career, which would take him to sci-fi fame in CREATURE FROM THE BLACK LAGOON and It Came From Outer Space. Mischa Auer, Shemp Howard, Marc Lawrence, Milton Parsons, and Thurston Hall all add to the fun. The animated title sequence may (or may not) be by “Woody Woodpecker” creator Walter Lantz (I can’t find any info on this….does anyone out there know?). HOLD THAT GHOST holds its own in the spooky deserted house creepstakes and it’s a funny showcase for stars Abbott & Costello and comedienne Joan Davis. Watch it with the kids this Halloween!!

And now here’s a link to The Andrews Sisters singing their hit song “Aurora”!!