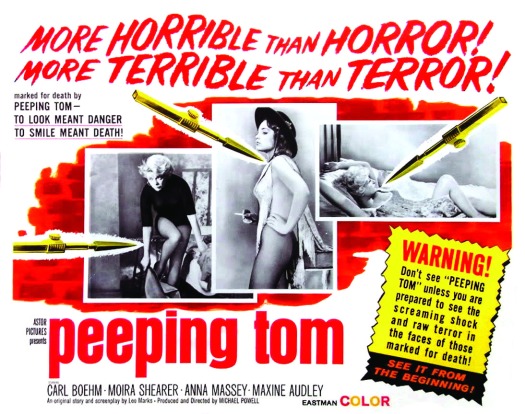 PEEPING TOM had been sitting in my DVR for a year before I finally got around to viewing it recently. I shouldn’t have waited so long, for this is absolutely one of the best horror films I’ve ever seen, and I’ve seen a lot of them. This movie, released the same year as Hitchcock’s PSYCHO, is an outstanding look at voyeurism, mental illness, and murder, and along with PSYCHO helped usher in the slasher genre. It’s ‘movie within a movie’ backdrop makes it a bonus for film fans, putting it in a category beyond horror as a great film period! 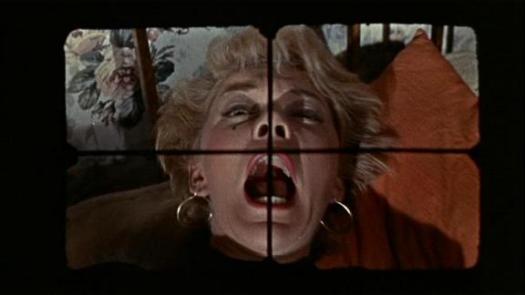 The opening sequence sets the stage for the madness yet to come, as we salaciously watch the murder of a prostitute through the lens of the killer’s camera. Then we see the killer go home and view the footage in his darkroom, obviously getting off on it. It’s a chilling scene as we the audience participate in the voyeuristic indecency of it all, becoming voyeurs ourselves.

We then meet the man behind the camera, Marl Lewis, an aspiring cinematographer who snaps pornography on the side. Mark’s a socially awkward, tortured soul unable to express true emotion without the aid of his camera. He rents rooms in his large house to supplement his income, most of which goes to his film obsession. The reclusive Mark is befriended by renter Helen Stephens, a young girl curious about her loner landlord. She sees him looking through her window during her 21st birthday party and decides to invite him. Mark shyly declines, but later Helen brings him up a slice of cake. She gets him to open up a bit, and he in turn tells her about his “work”. Asking to see one of his films, Mark hesitates at first, then brings her in the darkroom. Grabbing the snuff footage at first, Mark switches to film shot by his psychologist father when he was a lad. Dad sought to produce a record of the child’s upbringing, and reactions to fearful situations. Basically, the father tortured the son throughout his young life, leaving this sad shell of a man as the result of his scientific curiosity. Helen is appalled, and asks he turn the film off. Helen’s disgust at Mark’s treatment mirrors our own, and gives a glimpse into his fragile psyche.

Mark is working on a film at the studio, “The Walls Are Closing In” as a cinematographer’s assistant. After several takes on a scene, where we get a backstage look at the making of a movie, everyone wraps for the night. Mark stays behind with Vivien, an extra looking to get some exposure, promising to take some footage of her. Vivien gets loose by dancing to some be-bop jazz, as Mark begins shooting. He slowly points the camera at her, telling Viv he wants her to show fear. Vivien doesn’t quite understand what he’s trying to get with this shot, until he unfurls his knife-edged tripod leg, and moves closer and closer, explaining exactly what reaction he wants, then strikes with the blade, piercing her delicate throat! This is a long, terrifying scene, one of the most gripping and tense you’ll find in horror cinema, leaving the viewer again an unwitting participant in Mark’s voyeurism… though by watching the movie, we become just as complicit in the carnage.

Helen gets news her children’s book is to be published, a book about a magic camera, and wants Mark to do the photography. They go on a date to celebrate, and she asks him to leave his camera behind. He’s reluctant to do so, but Helen finally convinces him. They return, and Mark finds Helen’s blind mother sitting in his darkroom. Though she can’t see, her other senses are sharp, and she feels there’s something wrong with him. She warns Mark away from Helen, pleading with him to get help. At the studio, Vivien’s body is found in a prop trunk, and the police investigate. Mark of course films it, and strikes up a conversation with a police psychologist who knew his father. He asks the shrink if scopophobia can be cured, and told it would take years of therapy. The police are suspicious of Mark because of his odd behavior, especially after the shrink states, “He has his father’s eyes”. They follow him to the tobacconist’s shop where he takes his porn pics, and murders yet another model, while at home Helen’s curiosity gets the best of her and she puts on one of his home movies, horrified to find out it’s a snuff film. Then Mark comes home and…

I’m not going to spoil the ending, just tell you it literally sent shivers down my spine, tough to do for a hardcore horror buff like me. PEEPING TOM is a brilliant piece of cinema by one of its masters, Britain’s Michael Powell, who along with creative partner Emeric Pressberger (as ‘The Archers’), produced, wrote, and directed one classic after another (49TH PARALLEL, STAIRWAY TO HEAVEN, BLACK NARCISSUS,THE RED SHOES). After going their separate ways Powell made PEEPING TOM on his own, from a taut screenplay by former cryptographer Leo Marks. The film was almost universally reviled by critics of the day, dubbing it pornographic and sick in nature, and it pretty much ruined Powell’s career. It wasn’t until years later when filmmaker Martin Scorsese cited it as an influence on his own career, and helped fund a rerelease in 1978, that the film found its audience, and a critical reappraisal hailed it as one of the greatest British horrors ever made. 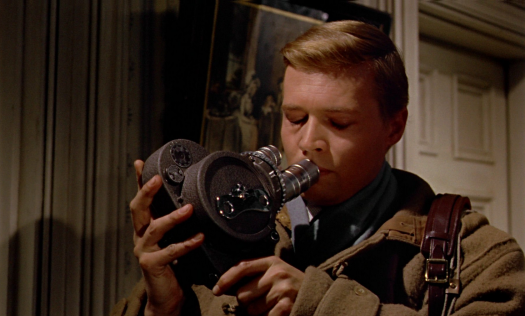 Carl Boehm gives one of horror’s greatest performances as Mark, a totally creepy and pathetic human being. While watching I was reminded of Peter Lorre’s chilling star turn in Fritz Lang’s M. Mark acts throughout the film as though he’s not completely present, only able to come alive when his camera’s rolling. He’s a tortured soul who was robbed of his childhood by his sadistic scientist father, and suffers from sexual repression, only able to get off while viewing his beloved medium. We want to believe there’s help to be had for him, but as the film evolves we discover Mark’s too far gone to ever return to sanity.

Anna Massey was 23 when she played Helen, and the daughter of actor Raymond Massey gives us a fine portrait of a young woman who falls for the wrong guy. Moira Shearer, who starred in Powell’s THE RED SHOES, has a Janet Leigh-like role as the doomed Vivien. The rest of the cast, including Maxine Audley, Shirley Anne Field, and Nigel Davenport, is equally outstanding. PEEPING TOM is one of horror’s seminal films, a shocker that even a jaded horror buff like me found frightening. It’s a must for Halloween season, and it’s ‘film-within-a-film’ backdrop makes it a must for classic movie lovers anytime. Don’t wait as long as I did, watch it now!