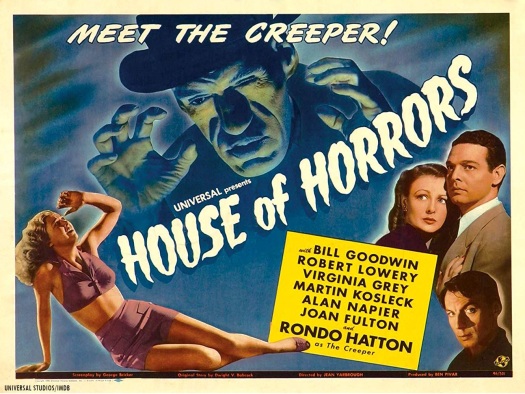 Rondo Hatton (1894-1946) was dubbed by “The Ugliest Man in Hollywood” by Universal for his repulsive visage. Originally a Tampa-based sportswriter, Hatton began developing the disease acromegaly as a young adult, a form of gigantism which distorts the facial features and bone structure (wrestler Andre the Giant suffered from this). Rondo moved to Hollywood and got work as a film extra and some bit parts (he can be spotted in SAFE IN HELL , IN OLD CHICAGO, THE HUNCHBACK OF NOTRE DAME (’39 version), and THE OX BOW INCIDENT, among others).

Hatton played “The Hoxton Creeper” in the 1944 Sherlock Holmes entry THE PEARL OF DEATH (with Universal Scream Queen Evelyn Ankers as a villainess, for a change), then proceeded to scare the daylights out of audiences in JUNGLE CAPTIVE and THE SPIDER WOMAN STRIKES BACK. While not a trained actor, his unique looks made him a perfect fit for horror. Hatton died in January 1946 before the release of his last two films, and today let’s take a look at the better of the pair, HOUSE OF HORRORS. 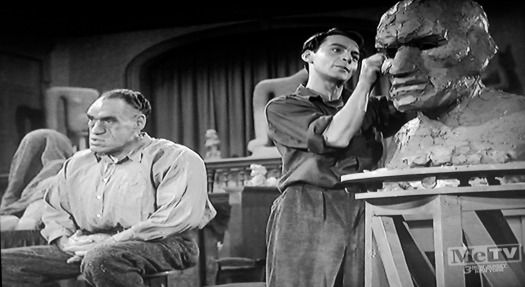 Martin Kosleck  plays Marcel De Longe, a sculptor of (shall we say) limited talent whose work is excoriated by an acerbic art critic (Alan Napier ). The already unstable artist goes off the deep end, and decides to end it all. Instead, he winds up saving another lost soul from drowning – the notorious serial killer The Creeper! The two oddballs bond, and Marcel creates his masterpiece, a bust of Creeper’s hideous head! Creeper returns the favor by snapping the critic’s spine, and commercial artist Steve Morrow (Robert Lowery ), who recently fought with the pompous jerk, becomes the prime suspect, while Creeper continues to kill Marcel’s enemies. 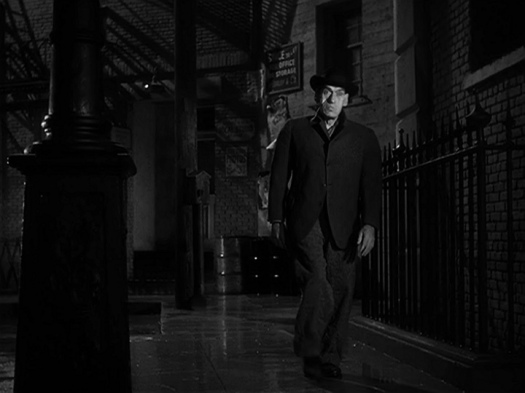 While homicide detective Lt. Brooks (Bill Goodwin) is busy trying to put the moves on Steve’s sexy model (Joan Shawlee ), Steve’s girl, art critic Joan Medford (Virginia Grey) visits Marcel, looking for filler for her Sunday column. Sneaking a peek at Marcel’s latest piece, she lifts his drawing of Creeper to run in the paper. The engraving boys notice a resemblance to the mad killer, while Marcel notices the sketch is missing, and he sends The Creeper out to kill again…. 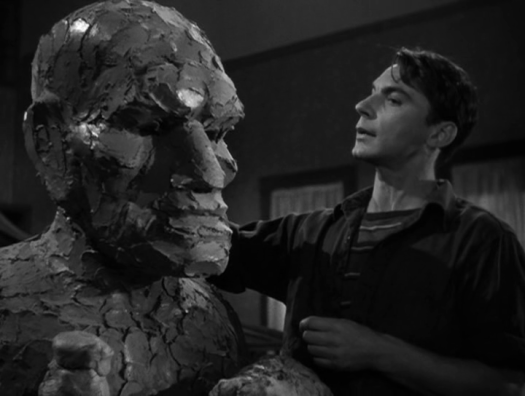 Kosleck is a lot of fun as the deranged De Longe, whether having conversations with his cat or bugging out in all his crazy-eyed glory. Grey is also good as a snappy newshound, but Robert Lowery’s as wooden as ever. Joan Shawlee (credited as Joan Fulton) stands out in more ways than one as the model; fans know her best as ‘Sweet Sue’ in SOME LIKE IT HOT. Napier, always remembered as Alfred the Butler on TV’s BATMAN, is good too, as the George Sanders-like pompous jerk. Familiar Faces include Virginia Christine as one of Creeper’s early victims, Byron Foulger, Howard Freeman, Syd Saylor, and Charles Wagenheim.

But it’s Rondo Hatton who’s the star attraction, and the reason fans still remember this minor but effect little chiller directed by Jean “DEVIL BAT ” Yarbrough. In 2002, The Rondo Hatton Classic Horror Awards were established by horror fandom, given to the best in film, television, books, art, and websites every year. The award was created by comic artist Kerry Gammill, and is based on Marcel’s bust of The Creeper in HOUSE OF HORRORS: 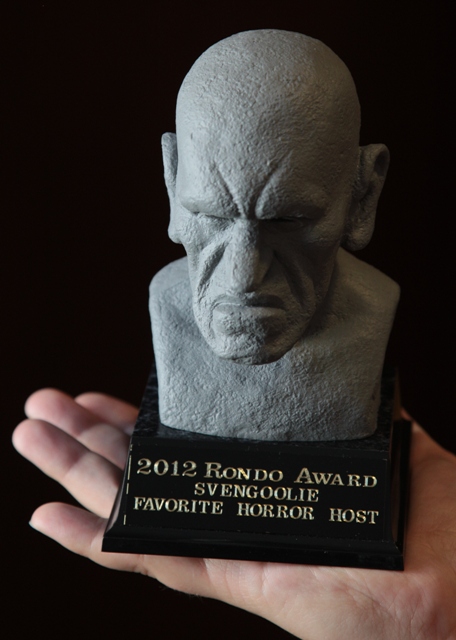