Oh boy. TCM is running a salute to AIP every Thursday this month. Now I’ll never get that DVR cleaned out! American International Pictures released some of my favorite films of the 50’s, 60’s, and 70’s, and TCM’s showing everything from Vincent Price/Roger Corman/Edgar Allan Poe horrors to outlaw biker flicks to Beach Party teen shenanigans. Expect to see lots of AIP posts in the near future, starting right now with 1958’s ATTACK OF THE PUPPET PEOPLE.

One of my earliest movie memories is watching this on the local “Four O’ Clock Movie Matinee” when I was about five years old. For some strange reason, it resonated with me. I haven’t seen it in years, and my recent re-viewing had me wondering just why it did. Maybe I was a strange kid! Anyway, ATTACK OF THE PUPPET PEOPLE was the brainchild of Mr. B.I.G. himself, producer/director/effects wizard Bert I. Gordon. Well, maybe “wizard” isn’t the right term, as Gordon’s special effects were mainly using super-imposing techniques and rear projection screens to create his movie magic. Mr. B.I.G.’s DIY style was popular with the “Monster Kid” generation (that’s me!), and his low-budget masterpieces include THE AMAZING COLOSSAL MAN and its sequel WAR OF THE COLOSSAL BEAST, EARTH VS THE SPIDER, THE MAGIC SWORD (a fantasy with Basil Rathbone as an evil wizard), VILLAGE OF THE GIANTS, FOOD OF THE GODS, and EMPIRE OF THE ANTS. (As of this writing, Bert Gordon is still with us at age 93).

ATTACK OF THE PUPPET PEOPLE is the opposite of Gordon’s giant monster movies, as it concerns shrinking people to doll-size. Sally Reynolds (June Kenny, EARTH VS THE SPIDER) answers an ad for an “office girl” at Dolls Incorporated, run by kindly, eccentric Mr. Franz (character actor John Hoyt ). Franz has a habit of talking to his dolls, especially some particularly lifelike ones he keeps in a glass case. Sally meets Bob Westley (the overacting, eyebrow arching John Agar , star of many a sci-fi schlockfest), the self-proclaimed “best salesman this side of St. Louis”. Bob and Sally don’t hit it off at first, and soon they’re engaged, with Bob promising to tell Franz the good news.

When Franz’s old friend Emil (Michael Mark… more about him later!) pays a visit, we learn the dollmaker’s wife left him, and he now suffers from an exaggerated case of separation anxiety. He can’t stand when people leave him. He tells Sally that Bob has left for St. Louis without her. But when Sally spies a lifelike Bob doll, she fears the worst, and runs to the police, claiming Franz has “made Bob into a doll”. Sgt. Paterson is skeptical of course (wouldn’t you be?), but when she rattles off the names of other recent missing persons, the cop goes with her to confront Franz, who burns the Bob-doll before their very eyes! It seems it’s “only made of plastic”, and Franz has a suitcase full of Bob-dolls he’s made. The cop leaves, and Franz now has Sally in his clutches. Using his ‘molecular disintegration ray’, he turns Sally into one of his doll-people! Now Sally and Bob, along with brassy Georgia, 50’s teens Laurie and Stan, and Mac the Marine, are miniature versions of themselves, and forced to entertain Franz as his ‘Puppet People’, kept in a state of suspended animation until he wants to play with them. 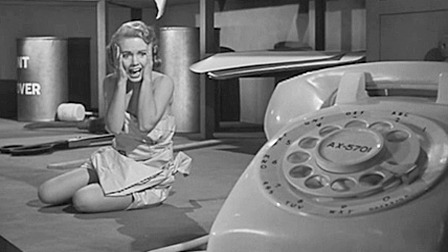 ATTACK OF THE PUPPET PEOPLE isn’t very frightening, nor does it achieve any dramatic heights. It’s silly and loopy, and its “shrinking” theme was done much better in DR. CYCLOPS and THE INCREDIBLE SHRINKING MAN. But it’s still fun, and Gordon gives us a nice touch when Bob and Sally go on a date to a drive-in. The film they watch is Gordon’s THE AMAZING COLOSSAL MAN. The scenes where the doll-people are surrounded by giant props are well done, and the rear projection special effects aren’t all that bad, considering the budget limitations. Hindsight being what it is, I probably enjoyed this movie more when I was five than I did now. Having said that, I recommend ATTACK OF THE PUPPET PEOPLE for the inner five-year-old in all of us. And that’s not such a bad thing after all! 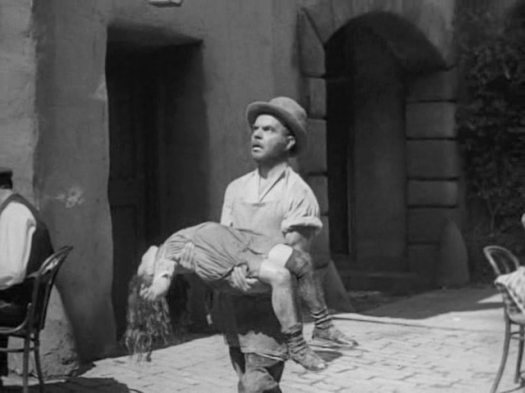 Michael Mark, who plays Emil, is best known as little Maria’s father in the 1931 classic FRANKENSTEIN. Eagle eyed Cracked Rear Viewers can spot him in uncredited roles in THE BLACK CAT, MAD LOVE , THE MUMMY’S HAND, and even CASABLANCA ! Mr. Mark appeared  in four Universal FRANKENSTEIN films altogether, tying him with Boris Karloff, Bela Lugosi, and Dwight Frye for second place in the series. Can you name the two horror icons who appeared in the most Universal FRANKENSTEIN movies, with five? (Hint: one of them played the same role four out of his five times)