Hollywood’s first true horror star was the inimitable Lon Chaney Sr, ‘The Man of a Thousand Faces’. Chaney’s superb pantomime skills, having been brought up by deaf parents, served him well in silent cinema, and his grotesque makeups in PHANTOM OF THE OPERA and HUNCHBACK OF NOTRE DAME sent shivers down 1920’s audience’s spines. Most notable were his ten bizarre collaborations with director Tod Browning,  including THE UNKNOWN (with young Joan Crawford ), LONDON AFTER MIDNIGHT (Chaney as an ersatz vampire, now a lost film), and WEST OF ZANZIBAR (remade as the Pre-Code shocker KONGO).   Chaney and Browning scored a big hit with 1925’s THE UNHOLY  THREE, which Chaney remade in 1930 as his only talkie before succumbing to throat cancer later that year. While THE UNHOLY THREE isn’t an out-and-out horror film, it’s got enough weird elements in it and, since it’s you’re only chance to see the great Lon Chaney talk onscreen, deserves a look this Halloween season. 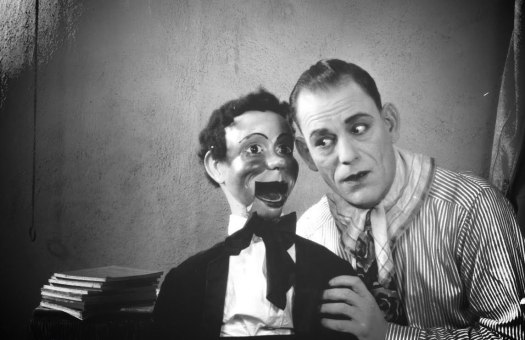 We begin in a sideshow where the collections of oddities include sword-swallowers, bearded ladies, and conjoined twins. Chaney plays Echo, billed as ‘The World’s Greatest Ventriloquist’, who performs his act while his crony Rosie O’Grady picks the enthralled rube’s pockets. Echo keeps an ape locked in a cage for gawkers, which the strongman Hercules fears. Then there’s Tweedledee, a midget with a bad attitude, so bad he kicks a little child in the face and causes a riot to break out! 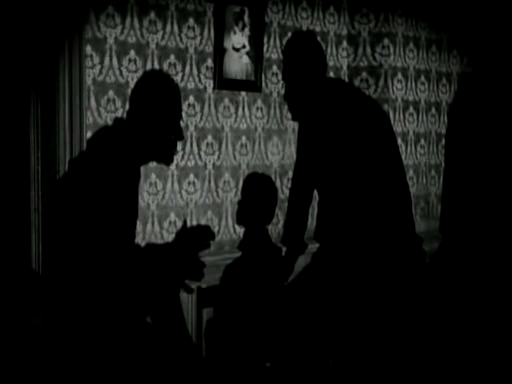 These three (and Rosie) escape the melee and form a crime ring called ‘The Unholy Three’, planning robberies from their pet shop headquarters. Since they’re on the lam after the riot, Echo becomes Mrs. O’Grady (in full drag), a sweet old lady using his ventriloquist talents to sucker rich patrons into thinking they’ve bought talking parrots, then casing their homes to rob them. Tweedledee is disguised as baby Willie, Mrs. O’Grady’s grandson, while Hercues acts as his son-in-law. Rosie is the front, and Hector McDonald is a clueless clerk, unaware of the gang’s real intentions. Rosie and Hector get along a little too well for Echo’s liking, and his jealousy causes him to stay behind while Hercules and Twedledee take it on themselves to rob Mr. Arlington, resulting in murder.

The crooks decide to kill two birds with one stone by setting up Hector for the job, getting rid of Echo’s rival in the process. A ruby necklace is found in Hector’s coat pocket and he gets arrested, while The Unholy Three take it on the lam once again, forcing Rosie to come along. Hiding out in a mountain cabin while Hector’s trial goes on, Rosie begs Echo to do the right thing, vowing to stay with him if he helps free Hector. Echo returns to the city as Mrs. O’Grady and takes the stand, while at the cabin Hercules tries to persuade Rosie to leave with him and split the loot. Angry Tweedledee hears this and sets the gorilla loose on Hercules, but not before he’s strangled by the strongman. Rosie escapes with her life, but Echo’s ruse is discovered by the D.A. and he makes a full confession. Sentenced to five years, Echo frees Rosie from her vow so she can be with Hector, and repeats his words to live by, “That’s all there is to life… just a little laugh, a little tear”.

The ending has been changed from the silent version, and to be honest I prefer the original. But like I said, it’s the only chance to see Chaney talk, and he’s just as good as in his silent vehicles, plus he gets to use his vocal skills doing four different voices. Jack Conway took the director’s chair from Browning, and does a fair job with the material. I also like the 1925 cast better, with Mae Busch (Rosie) and Victor McLaglen (Hercules) in the roles now played by Lila Lee and Ivan Linow. Harry Earles repeats his role as the evil dwarf Tweedledee, and his performance is chilling, though it’s sometimes hard to understand his thick German accent with the then-new recording technology being what it was. Earles is well-known to horror buffs as the lead in Browning’s FREAKS, and can be seen as one of the Lollipop Guild in THE WIZARD OF OZ.

Without Lon Chaney Sr. paving the way, the horror of the cinema as we know it wouldn’t be the same. THE UNHOLY THREE is a curio to be sure, but one classic film fans should see for the talents of ‘The Man of a Thousand Faces’ in his only speaking part. It’s said Tod Browning was considering Chaney to star in his DRACULA, but sadly that wasn’t to be. How different would horror movies of the thirties be if Chaney had lived? The world will never know.