Hammer Films wasn’t the only British company cranking out the horrors back in the 60’s and 70’s. American ex-pats producers Milton Subotsky and Max Rosenberg formed Amicus Films in 1962 and after a couple of films aimed at the teen audience (with American rockers like Chubby Checker, Del Shannon, Freddy Cannon, and Gene Vincent) began concentrating on horror. The team specialized in the anthology genre, or “portmanteau” as the intelligentsia call them. I’ll stick with anthologies!

THE HOUSE THAT DRIPPED BLOOD was a 1971 effort written by Robert Bloch, forever known as “The Guy Who Wrote PSYCHO”. The nail to hang Bloch’s four tales on concerns the disappearance of famous horror actor Paul Henderson, who was last seen at the old house in the countryside. Inspector Holloway (John Bennett) of Scotland Yard (where else?) arrives on the scene and speaks with the local constable, who warns Holloway about mysterious doings past: 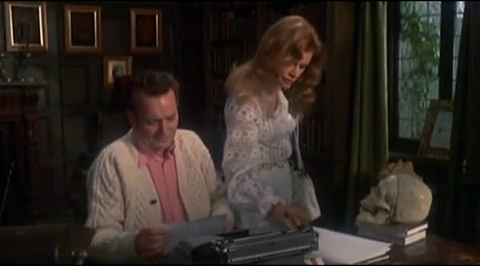 In “Method for Murder”, horror writer Charles Hillyer (Denholm Elliott) thinks the quiet country manor is the ideal cure for his writer’s block, and moves in with wife Alice (Joanna Dunham). Hillyer comes up with a story about serial strangler Dominick roaming the countryside, and soon begins to have visions of his creation lurking around the house and grounds. It’s the old GASLIGHT routine, and though it does boast a double-twist ending, this one’s probably the weakest of the quartet. 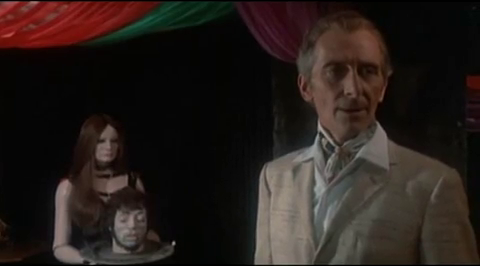 Up next is “Waxworks”, starring Peter Cushing as a retired stockbroker who rents the house. Cushing visits Jacquelin’s Museum of Horrors, and is mesmerized by a statue of Salome that resembles his late ex-love. His friend and former love rival (Joss Ackland) drops by, and he too is enthralled by the figure. The proprietor (Wolfe Morris) tells the men Salome was modeled on his dearly departed wife, who chopped up her lover with an axe and was sentenced to death. Although this segment isn’t bad, it won’t come as a surprise to anyone who’s viewed MYSTERY OF THE WAX MUSEUM or HOUSE OF WAX. 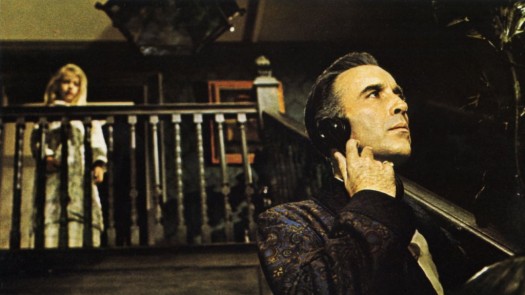 Our Inspector then travels to the office of realtor A.J. Stoker (!!), who conveys the final two tales. “Sweets for the Sweet” finds widower Christopher Lee renting the house with young daughter Jane (Chloe Franks). He hires nanny Anne Norton (Nyree Dawn Porter) to tutor the child, whom he treats rather coldly. The father forbids Jane from going to school and interacting with other children or playing with toys, especially dolls. The reason being Jane’s mother was a witch, and the child has inherited her evil ways. This vignette is built up well, with the cast elevating it from merely creepy to suspenseful horror. 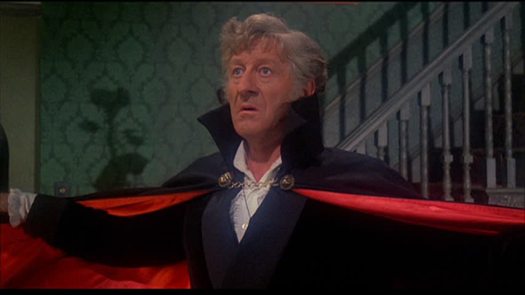 Now we come to the most recent tenant, Paul Henderson, in “The Cloak”. This one’s a lot of fun, as hammy horror star Henderson (Jon Pertwee) begins filming yet another low-budget shocker, titled “Curse of the Bloodsuckers”. Henderson is pissed about the piss-poor sets and costumes, and goes on a tirade about the state of the horror film: “That’s what’s wrong with your present-day horror films, there’s no realism! Not like the old ones, no, the great ones… FRANKENSTEIN, PHANTOM OF THE OPERA, DRACULA … the one with Bela Lugosi, not the new fellow!”. After his rant, Henderson receives a card from Theo Von Hartmann, costumer in the local village. Von Hartmann’s a slender, sinister looking old gent cradling a black cat in his arms who sells Henderson an antique cloak. The actor thinks it’s just right for his film, but when he dons it in his dressing room, he’s startled to discover he can no longer see his reflection in the mirror.

While filming a scene with frequent co-star Carla Lynde (Hammer honey Ingrid Pitt), Henderson puts the bite on her for real, earning him a slap in the face. At home, he once again puts on the cloak, and to his horror begins floating around the room. The next day he apologizes to Carla and invites her to dinner, where he tells her about the powers of the evil cloak. This time, the cloak doesn’t work, as Carla’s switched it for a prop (“Property of Shepperton Studios” is sewn in the label!). Now Carla has it, and prepares to sink her teeth into some juicy ham! 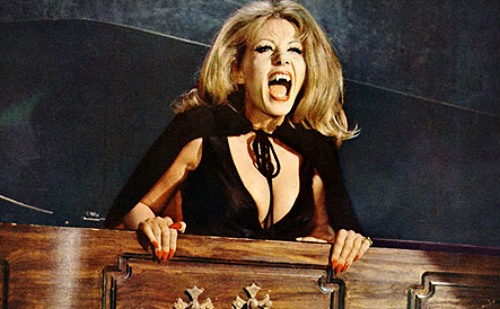 Inspector Holloway dismisses all these tales as rubbish, demanding to go into the house himself, where of course he’s attacked by the vampires, bringing our tales of terror to a close. THE HOUSE THAT DRIPPED BLOOD is okay, no better or worse than any other Amicus production (or episode of NIGHT GALLERY for that matter), and the final two segments are terrific. Subotsky and Rosenberg did other stand-alone horror flicks (THE SKULL, THE DEADLY BEES, THE BEAST MUST DIE), a pair of DOCTOR WHO features, and some Edgar Rice Burroughs adaptations, but it’s for their anthologies they’re best remembered. DR. TERROR’S HOUSE OF HORRORS, TORTURE GARDEN, ASYLUM, and two EC Comics-inspired movies (TALES FROM THE CRYPT and THE VAULT OF HORROR) are all worth watching, as is THE HOUSE THAT DRIPPED BLOOD. Nothing groundbreaking, just a good way to spend a dark and stormy night!

9 Replies to “Halloween Havoc!: THE HOUSE THAT DRIPPED BLOOD (Amicus 1971)”