Halloween has come and gone, though most people have plenty of leftovers on hand, including your Cracked Rear Viewer. Here are some treats (and a few tricks) that didn’t quite make the cut this year: 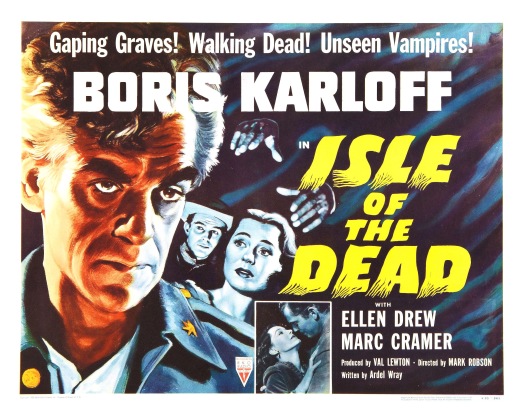 Typically atmospheric Val Lewton production stars Boris Karloff as a Greek general trapped on a plague-ridden island along with a young girl (Ellen Drew) who may or may not be a vorvolaka (vampire-like spirit). This film features one of Lewton’s patented tropes, as Drew wanders through the woods alone, with the howling wind and ominous sounds of the creatures of the night. Very creepy, with another excellent Karloff performance and strong support from Lewton regulars Alan Napier, Jason Robards Sr, and Skelton Knaggs. Fun Fact: Like BEDLAM , this was inspired by a painting, Arnold Bocklin’s “Isle of the Dead”.

Leo Gorcey, Huntz Hall, and the gang  get mixed up with the creepy Gravesend family in a spooky old mansion, complete with mad scientists, vampires, a man-eating tree, a robot, and of course a killer gorilla in this above-average series entry. Sure it’s low budget and derivative as hell, but it’s also a lot of fun, with a better than usual supporting cast that includes John Dehner, Lloyd Corrigan, and Ellen Corby. Director Bernds and his co-screenwriter Ellwood Ullman put their Three Stooges experience to good use, and the result is a silly scare farce that even non-Bowery Boys fans will probably enjoy. Fun Fact: Ex-bartender Steve Calvert bought Ray “Crash” Corrigan’s old gorilla suit and appeared in JUNGLE JIM, THE BRIDE AND THE BEAST (written by Ed Wood), and the awful BELA LUGOSI MEETS A BROOKLYN GORILLA .

AIP tried to continue their successful Edgar Allan Poe series with this film. Roger Corman was long gone, so Gordon Hessler took over the director’s chair. Vincent Price is still around though, as the brother of a voodoo victim who was prematurely buried, then dug up by graverobbers to seek revenge. Christopher Lee has “Special Guest Star” status, but isn’t given much to do as a Knox-like doctor using bodies in the name of science. The movie seemed a lot scarier when I saw it as a youth; unfortunately, it doesn’t hold up very well. The 24 year old Hillary Dwyer is much too young to play 58 year old Price’s fiancé. Fun Fact: Michael Reeves (THE SORCERERS , WITCHFINDER GENERAL) was scheduled to direct before his untimely death; this probably would’ve been a better film with him at the helm. 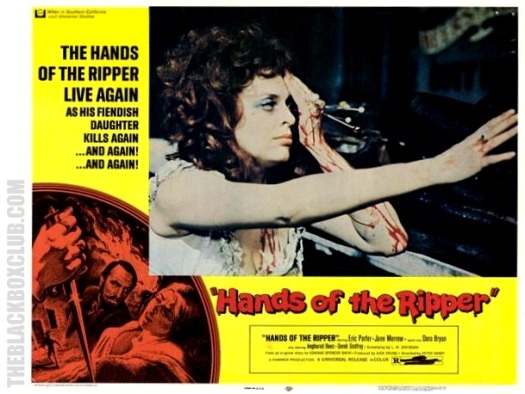 Minor but effective Hammer chiller about the daughter of Jack the Ripper (Angharad Rees) who’s possessed by daddy’s evil spirit, and the psychologist (Eric Porter) who tries to help her by using the then-new Freudian therapy techniques. It’s science vs the supernatural, with some good moments of gore, but the slow pace makes it definitely lesser Hammer. I must admit I loved the ending, though. Fun Fact: Director Sasdy filmed several Hammer horrors in the early 70’s, including TASTE THE BLOOD OF DRACULA and COUNTESS DRACULA. He also was responsible for the Pia Zadora vehicle THE LONELY LADY, winning himself the prestigious Razzie Award in 1983! 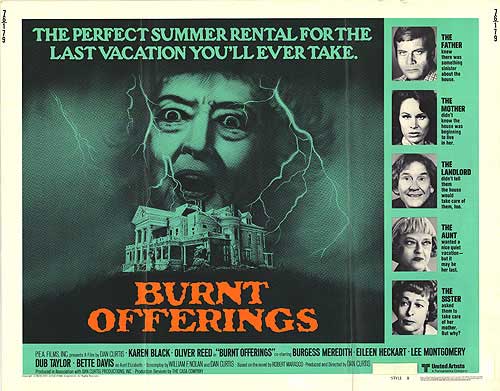 A family rents an eerie old country home for the summer, and are soon pitted against an evil force. With all that talent in front of (Bette Davis , Karen Black, Oliver Reed, Burgess Meredith, Eileen Heckert) and behind (producer/director/writer Curtis , co-writer William F. Nolan, DP Jacques Marquette) the camera, I expected a much better film. Even the great Miss Davis can’t help this obvious haunted house story to rise above the level of a made-for-TV potboiler. Disappointing to say the least. Fun Fact: Production designer Eugene Lourie directed the sci-fi flicks THE BEAST FROM 20,000 FATHOMS, THE GIANT BEHEMOTH , and GORGO.

22 Replies to “Cleaning Out the DVR Pt 10: Halloween Leftovers”