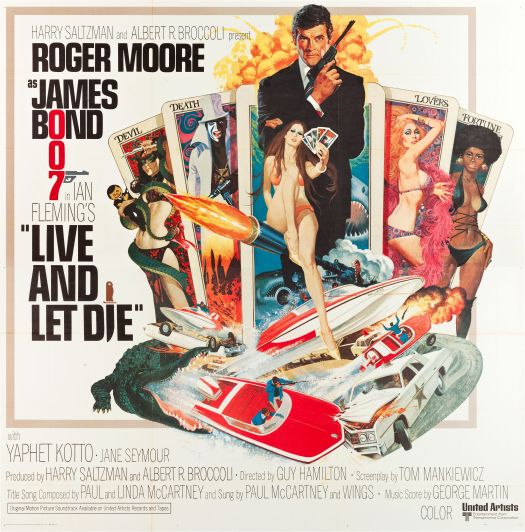 Three British agents are murdered, and James Bond is sent overseas to investigate the doings of Dr. Kananga, despot of the Carribean island nation of San Monique in LIVE AND LET DIE. But wait… that’s not Sean Connery as 007, or even George Lazenby. It’s Roger Moore , making the first of his seven appearences as Bond, and adding his own indelible stamp to the role. Moore is a bit more humorous as the secret agent in a film that has elements of Blaxploitaion and voodoo horror to it, but is still 100% Bond.

Sir Roger, fresh off starring in televisions THE SAINT and THE PERSUADERS, handles the role with aplomb, whether battling the bad guys or wrestling in the boudoir. The plot concerns 007 trying to learn the secret of Dr. Kananga and his connection with Harlem ganglord Mr. Big. This takes Bond to New York, New Orleans, and Jamaica (subbing for the fictional San Monique), with plenty of action and perils along the way. Kananga relies heavily on the occult power of Tarot reader Solitaire, but it seems romance with Bond is in the cards for her. Kananga’s got some heavy hitting henchmen, like Tee Hee and his metal claw hand, and Baron Samedi, who may or may not be the real-deal leader of the “legion of the dead”.

Of course, there are lots of action set-pieces along the way, including at a crocodile farm, and a long boat chase through the Louisiana bayous, where we’re first introduced to redneck Sheriff J.W. Pepper, a character many Bond fans disdain, but I’ve always had a soft spot for actor Clifton James’s comic-relief cop. Things get ugly when Bond learns Kananga’s fiendish plan to flood the U.S. market with free heroin, essentially putting the mob out of business and taking control of the drug trade, and that Kananga and Mr. Big are one and the same. Captured in the criminal’s underground lair, Bond and Solitaire are about to become shark bait, but we all know 007’s much to clever for that!

Yaphet Kotto  is suitably evil in the dual role of Kananga/Mr. Big. Kotto, a movie mainstay in the 70’s and 80’s, is best known to contemporary audiences for his time on TV’s HOMICIDE: LIFE ON THE STREETS. Jane Seymour is one of my favorite Bond babes as the mystical Solitaire. Blaxploitation vet Julius Harris is his usual menacing self as Tee Hee. Dancer Geoffrey Holder is scary good fun as Baron Samedi (later played by Don Pedro Colley in SUGAR HILL ). Gloria Hendry plays traitorous rookie agent Rosie Carver, while David Hedison takes his first turn as CIA liason Felix Leiter (he’d return to the role in 1989’s LICENSE TO KILL). Bernard Lee and Lois Maxwell are back as M and Miss Moneypenny, respectively. 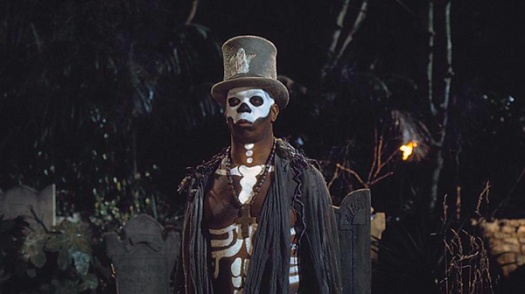 Guy Hamilton returns as director, working from a Tom Mankiewicz screenplay, in this unusual entry in the 007 canon. The theme song was a big hit for ex-Beatle Paul McCartney , rising to #2 on the Billboard charts. Beatle producer George Martin orchestrates the films’ score. LIVE AND LET DIE was a great first outing for Roger Moore, though his Bond movies did seem to get progressively sillier as time went on. Let’s wrap up this look as Roger Moore’s Bond debut with the spooky-cool opening credits, sung by the one and only Paul McCartney: