Rats are not cute’n’cuddly little creatures. They’re disgusting, disease-infested vermin that should be avoided at all costs. But don’t tell that to WILLARD, title character in this 1971 chiller that started a regular revolution of “animals run amok” horror movies. Bruce Davison, later to become one of his generation’s finest actors (SHORT EYES, THE LATHE OF HEAVEN, LONGTIME COMPANION), is a regular rodent Dr. Doolittle here, not only talking to the animals, but handling them fondly while he trains them to kill his enemies. Rats – yuck!

Willard Stiles is a lonely loser who shares a rambling, decrepit manse with his  domineering mother (Elsa Lanchester) and works for bullying boss Martin (Ernest Borgnine ), who stole the family business from Willard’s late father. Office temp Joan (Sondra Locke) feels sorry for Willard, but the socially awkward nerd is uncomfortable around people, preferring instead to spend time with the rats in his yard, befriending and training them, then letting the varmints move into his cellar. His best furry friends are white rat Socrates and black rat Ben.

When Willard’s mom finally kicks the bucket, a tax lien is put on the house. None of the mother’s elderly friends want to help financially, and mean Mr. Martin wants to buy the property and erect apartment houses. Socrates is killed by Martin when the little bugger is discovered hanging out in the company storeroom (Willard takes he and Ben to work with him!), and Martin decides the only way to get that property is to fire Willard. This pushes young Willard over the edge, and he extracts revenge on Martin in gruesome fashion. Then Willard, realizing he can’t keep his home, drowns his remaining furry partners in crime. But he forgot about Ben, who carries out his own brand of vengeance…

Davison reminds me a bit of Anthony Perkins in PSYCHO; he’s definitely got some of that Norman Bates vibe, and his slow descent into madness is a bloody good time. Borgnine is a real prick as Martin, and his death scene is as creepy as it was when I originally saw this flick in the theater long ago. I’ve sung the praises of Sondra Locke on this blog before; her part is small, but her presence is always welcome, as is that of THE BRIDE OF FRANKENSTEIN herself, Elsa Lanchester, as Willard’s mom. 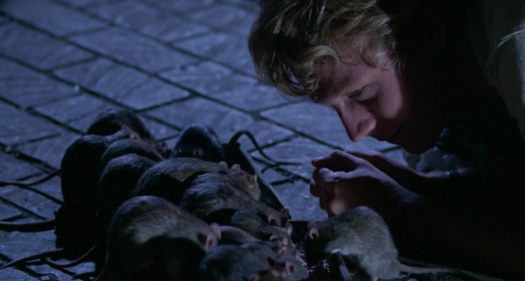 Daniel Mann directed some powerhouse dramas in the 50’s and early 60’s: THE ROSE TATTOO, I’LL CRY TOMORROW, TEAHOUSE OF THE AUGUST MOON. But after 1960’s BUTTERFIELD-8, his career declined, though on WILLARD he does a fine if unspectacular job. No matter; the material could’ve been directed by anybody (or a nobody) and would’ve worked, and it actually holds up rather well. Alex North delivers an eerie score, and the rats were well-trained by Moe DiSesso, a Hollywood animal trainer who worked with the bird in THE RAVEN , the dogs in THE HILLS HAVE EYES , and lovable Sandy in the musical ANNIE. Dogs and birds I don’t mind, but far as I’m concerned DiSesso can keep his nasty, gnawing little rodents. Rats – yuck!