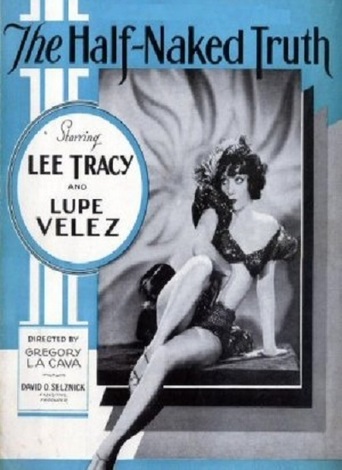 Director Gregory LaCava is remembered today mainly for a pair of bona fide classics: MY MAN GODFREY and STAGE DOOR. LaCava, who started his career in early silent animation, was also responsible for THE HALF-NAKED TRUTH, a Pre-Code screwball comedy begging to be rediscovered. It’s a crazy, innovative, pedal-to-the-metal farce headlined by fast-talking Lee Tracy and “Mexican Spitfire” Lupe Velez as a pair of carny con artists who work their way up to The Great White Way in grand comic style. 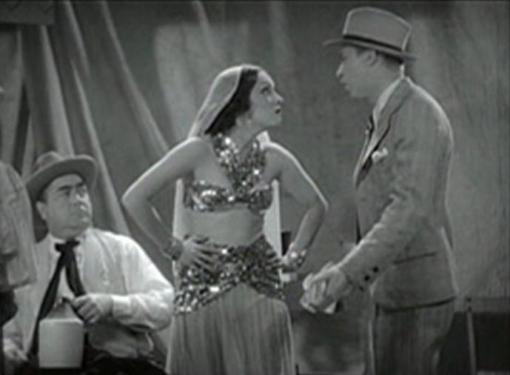 Tracy does his rapid-fire spieling schtick as a carnival barker promoting hot-tempered tamale Lupe, a hootchie dancer who spends most of the movie wearing next to nothing. Together with pal Eugene Pallette , they leave the carny life behind (with the law on their tails!) and head for Broadway, where Lee promises Lupe he’ll make her a star. The trio pawn Lupe off as Turkish Princess Exotica (with Tracy pawning off an unwitting Pallette as a eunuch!), and set their sights on Broadway impresario Merle Farrell, played to perfection by the perpetually befuddled Frank Morgan. Tracy’s promotional stunt includes importing a lion named Stamboli straight from Coney Island!

Soon hustler Tracy has Lupe under contract to Merle Farrell’s Follies, where the former hootchie becomes a Broadway sensation singing and dancing to the double entendre laden “The Carpenter Song”. She then dumps the loquacious Lee for old goat Morgan, causing him to promote a new find, hotel maid Gladys, redubbing her Eve, Queen of the Nudists! The hustling huckster also manages to snap a photo of Morgan and Lupe in a compromising situation, which he proceeds to plaster all over the producer’s office. Morgan’s no fool, so Lupe gets dumped, and Eve gets her follies spot. Lee misses his spicy little enchilada though, and a riotous scene finds every noise he hears reminding him of “The Carpenter Song”. The unhappy Tracy decides to chuck it all and return to carny life, where he finds his pal Pallette running the old show, and little Latin Lupe doing her hootchie thing once again. And they lived happily ever after!

Lee and Lupe make a great screen team, their styles meshing perfectly amidst all the zaniness going on here. Morgan and Pallette’s comic talents add to the merriment, and Shirley Chambers’ dumb blonde turn as Gladys/Eve holds her own with the star quartet. Franklin Pangborn is on hand as (what else?) the hotel manager, and “Queen of the Extras” Bess Flowers has a larger than usual part playing Tracy’s secretary. Max Steiner contributes the music, and even appears as the conductor at the Follies! We also get Teresa Harris (Barbara Stanwyck’s BABY FACE companion) in a brief bit as Lupe’s maid. 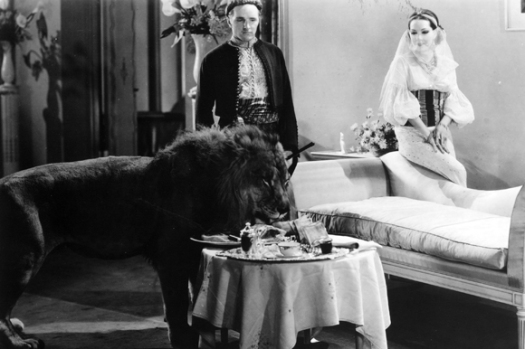 LaCava and Corey Ford’s screenplay is full of sharp, sparkling dialog, off the wall comedy situations, and blazing banter between Lee and Lupe. THE HALF-NAKED TRUTH is a Pre-Code delight, a forgotten little gem waiting to be savored by movie buffs. So what are you waiting for – go find it!